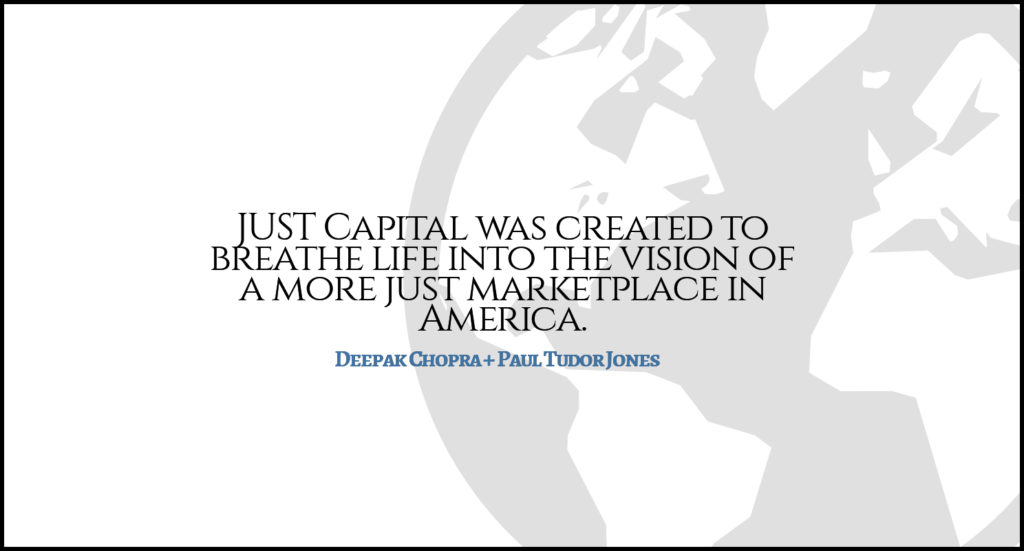 In August 2012, this column featured an article entitled Just Capital: What the 99% Really Need, which said “What the majority of people need in this country is a financial system that incorporates social justice.”

Last week, thanks to the work of JUST Capital, the nonprofit charitable organization we co-founded in 2014, that vision took a giant leap forward toward becoming a reality. On June 13, we rang the opening bell of the New York Stock Exchange for the launch of the JUST ETF, a new exchange-traded fund launched by Goldman Sachs, based on JUST Capital’s research. To our knowledge, it is the first ever financial product in which the underlying companies are included based solely on their alignment with the values and priorities of Main Street America. On the day of its release it became the single most successful sustainability or values-oriented ETF launch in history, and one of the top 10 equity ETF launches of any kind.

JUST Capital was created to breathe life into the vision of a more just marketplace in America. Our hope is that last week’s NYSE bell ringing represents a shift in how capitalism itself can better serve the broader best interests of society, especially for those who need it the most.

The salient point of the original article, and the mission that JUST Capital has taken on, is this: If we are to address the critical social challenges of our time, then the intrinsic enabling power of the $15 trillion private sector, and especially the large corporations that drive it forward, must be harnessed. Business as a force for good – in addition to making a profit – must become the new normal.

Unlike any other financial product we know of, the JUST ETF is built around the priorities and values of the American people. It is Main Street, not Wall Street, that gets to decide the criteria for just business behavior, how important they are, and ultimately how corporate success is defined.

We’ve captured the priorities of the public through three years of exhaustive polling and survey work, during which we engaged a cross-section of 75,000 Americans. We can now state with some confidence that the criteria for just businesses are: paying a fair (and living) wage; investing in workers; making healthier, more beneficial products; treating customers with respect; reducing environmental impacts; creating good jobs; strengthening communities; leading with integrity; and ultimately striking a better balance between the needs of all business stakeholders.

The beauty of this simple framework lies not just in its anchoring in basic, shared human values; it’s that it also makes for more successful company performance over time. In our rankings of the largest publicly-traded corporations in America, the most just corporations not only outperform their peers across all the themes described above, they also do better in the financial markets. Our diversified index of the top 50% of just corporations by industry has outperformed its benchmark in live trading by over 4% over the past 18 months, and the companies featured in the index generated a 7% higher return on equity. When you think about it, this shouldn’t be a surprise. Any company that invests in its workers, makes great products, looks after its customers, treats its community stakeholders well and is run with genuine integrity is bound to outcompete its peers. This is the win-win we believe in, and which many just corporate leaders throughout the country have also committed to.

The conditions that gave rise to the original two-part article about JUST Capital – the need to address income inequality, the erosion of public faith in our country’s institutions – have not changed. Indeed, some might say they have deteriorated. But the tools we are developing to overcome them are becoming at once more powerful and more in

tune with our fundamental values as a free market economy that is of, by, and for the people.

Paul holds a B.A. in Economics from the University of Virginia.