How Does Something Come Out of Nothing? A Cosmic Tale

The question of where the universe came from isn’t solved by pointing to the big bang, because this begs the question of where it came from. In physics creation is often dubbed “something out of nothing,” meaning that the entire observable cosmos emerged from a pre-created state that is devoid of the familiar landmarks of reality: time, space, matter and energy. The boundary between this “something” all around us and that “nothing” that is also present but undetectable has fascinated physics in recent decades. It’s a fascination we should all share if we want to know where creation came from.

The trail leading to a scientific explanation of the universe has run into problems. In ancient Greek thought physis, usually translated as “nature,” meant the fundamental essence or guiding principle of creation. Today the motive to unravel nature’s secrets remains the same, but it’s been frustrating to find a single unifying theory underlying the universe. Modern physics has a formidable reputation for rigor, and its theories are supported by advanced mathematical equations and computations, but the key paradigms within physics have been constantly changing and evolving. The Holy Grail of physics, to unify all the forces of nature into a Theory of Everything (TOE), has remained out of reach because the two most successful areas of physics, quantum mechanics and general relativity, are incompatible.

The solution is generally accepted to be a theory of quantum gravity, but in the usual regimes of natural phenomena that we observe and experience in daily life, it is impossible to observe quantum phenomena and gravity working together. Interestingly, Nature herself comes to our aid in understanding the gravity and quantum phenomena together or in a combined way. A quantum gravity laboratory is possibly created when a massive star collapses under its own gravity towards the end of its life cycle. The fascinating opportunity thus presents itself for making progress towards understanding of quantum gravity and TOE. At the same time, the collapse of massive stars takes us to the edge of the greatest mystery in creation: how something came out of nothing, and in this case, returns to nothing when its life cycle is over.

Having exhausted the fuel that sustained them for millions of years, massive stars are no longer able to hold themselves up under their own weight; they begin to shrink and collapse catastrophically under their own gravity. Modest stars like the Sun also collapse at the end of their cycle, but they stabilize at a smaller dwarf size. By contrast, when a star is massive enough, orders of magnitude larger than the Sun, its gravity overwhelms all the forces that might possibly halt the collapse. From a diameter millions of kilometers across, the star crumples to an infinitesimal dimension much smaller than the period at the end of this sentence. 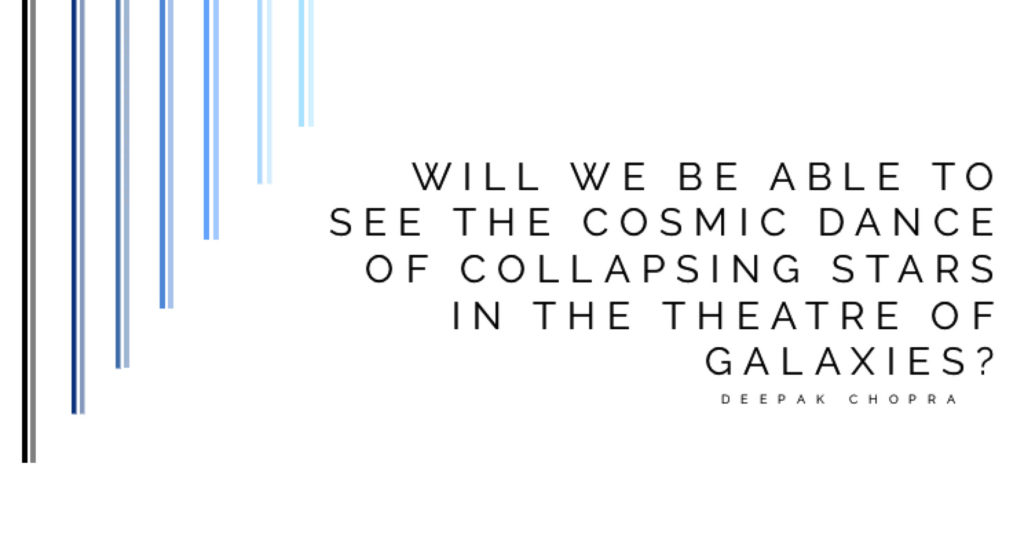 What is the eventual fate of such massive collapsing stars? This is one of the most exciting questions in astrophysics and modern cosmology today. To give some background, the story began some eight decades ago when Subrahmanyan Chandrasekhar probed the question of the final fate of stars such as the Sun. He showed that such a star, on exhausting its internal nuclear fuel, would stabilize as a “White Dwarf,” about a thousand kilometers in size. Eminent scientists of the time, in particular Sir Arthur Eddington, refused to accept this, saying that a star could never become that small. Chandrasekhar left Cambridge to settle in the United States, and after many years his prediction was verified. Later it also became known that stars which are three to five

times the Sun’s mass give rise to what are called neutron stars, about ten kilometers in diameter, after a supernova explosion.

But when a star has a mass more than these limits, the force of gravity is supreme and overwhelming. A star as massive as tens of solar masses burns much faster and lives only up to 10 to 20 million years, compared to a lifetime of some ten billion years for a smaller star like the Sun. When gravity is unopposed by countering forces, no stable configuration is possible, and amazingly the star’s catastrophic collapse happens within a matter of seconds. The outcome, as predicted by Einstein’s theory of general relativity, is a space-time singularity: an infinitely dense and extreme physical state of matter, not encountered in any of our usual experiences of the physical world.

As one possibility, a so-called event horizon of gravity can develop. This is essentially a one-way membrane that allows entry but no exit. If the star entered the event horizon before it collapsed to a singularity, the result is a black hole that hides the final singularity. Black holes are a permanent graveyard for the collapsing star. According to our current understanding, it was one such singularity, namely the big bang, that created the expanding universe. But the big bang isn’t unique. Such singularities will be produced whenever massive stars die and collapse. And so we arrive at the mysterious boundary of the cosmos, a region of arbitrarily large densities billions of times the sun’s density.

An enormous creation and destruction of particles takes place in the vicinity of a singularity. One could imagine this as the cosmic interplay of the basic forces of nature coming together in a unified manner. These energies and all physical quantities in the vicinity of singularity reach their extreme values; quantum gravity effects dominate this region. This is how collapsing massive stars present a laboratory for quantum gravity, holding out the potential for a TOE, if visible naked singularities occur in astrophysical settings in faraway skies. The basic question then arises: Are such super-ultra-dense regions forming in the collapse of massive stars, visible to faraway observers, or would they always be hidden in a black hole?

A visible singularity is sometimes called a naked singularity or quantum star. The visibility or otherwise of such a super-ultra-dense fireball that the star has turned into is one of the most exciting and important questions in astrophysics and cosmology today. This is because the unification of fundamental forces taking place here becomes observable, at least in principle.

A crucial point arises: while gravitation theory implies that singularities must form in collapse, we have no proof that the event horizon must necessarily develop. It was only a working assumption that an event horizon always does form, hiding all singularities without fail. This is referred to as the cosmic censorship conjecture, the foundation of the current theory of black holes and their modern astrophysical applications. But if the event horizon did not form before the singularity, we would then observe the super-dense regions that form in collapsing massive stars, and the quantum gravity effects near the naked singularity would become observable. Thus we could actually see the extreme physics near such ultimate super-dense regions. As a step toward this possibility, in recent years a series of collapse models have been developed in which the event horizon fails to form in the collapse of a massive star.

In short, it turns out that the collapse of a massive star gives rise to either a black hole or naked singularity, depending on the internal conditions within the star, such as its densities and pressure profiles, and the velocities of the collapsing shells. When a naked singularity occurs, small inhomogeneities (i.e., lumpiness) in matter densities close to singularity could spread out and magnify enormously to create high-energy shock waves. These, in turn, have connections to extreme high-energy astrophysical phenomena such as cosmic gamma ray bursts, which we do not yet understand today.

Will we actually be able to see this cosmic dance, the finale of collapsing stars in the theatre of the galaxies? Or will the black hole curtain always hide and close the end game off forever, even before the ferment of creation has begun? Only future observations of massive collapsing stars can possibly tell us. Interestingly, the 2014 sci-fi adventure Interstellar refers to naked singularities in the script, suggesting that without them we’d never understand how interstellar leaps in space travel are possible—but real science isn’t there yet.

As it stands, the closer we get to the boundary between nothing and something, the more urgent the problem of creation becomes. It’s as if “nothing” and “something” are merely symbols for domains of creation and pre-creation that can’t be understood with objective measurement. In the next part of this series we’ll look into the possibility that scientific knowledge is about to converge with the problem of how the human mind is able to know anything at all. In the end, our thoughts and feelings are “something out of nothing” just as much as collapsing massive stars and the big bang.

Deepak Chopra MD, FACP, founder of The Chopra Foundation and co-founder of The Chopra Cen-ter for Wellbeing, is a world-renowned pioneer in integrative medicine and personal transfor-mation, and is Board Certified in Internal Medicine, Endocrinology and Metabolism. He is a Fellow of the American College of Physicians, Clinical Professor UCSD Medical School, researcher, Neurol-ogy and Psychiatry at Massachusetts General Hospital (MGH), and a member of the American As-sociation of Clinical Endocrinologists. The World Post and The Huffington Post global internet sur-vey ranked Chopra #17 influential thinker in the world and #1 in Medicine. Chopra is the author of more than 85 books translated into over 43 languages, including numerous New York Times best-sellers. His latest books are You Are the Universe co-authored with Menas Kafatos, PhD, and Quantum Healing (Revised and Updated): Exploring the Frontiers of Mind/Body Medicine. discoveringyourcosmicself.com

Professor Pankaj Joshi is a theoretical physicist and Senior Professor at the Tata Institute of Fun-damental Research (TIFR), Mumbai India. Professor Pankaj Joshi has published many (more than 170) research papers, and monographs on cosmology and gravitation. He has made fundamental contributions on gravitational collapse, black holes and naked singularities. The new analysis on collapsing stars from Joshi and his collaborators, as reported and reviewed in his Oxford (1993) and Cambridge (2007) monographs, showed that both black holes and visible naked singularities form when massive stars collapse at the end of their life-cycles. Recent results from Cambridge, Princeton, Perimeter and others, now corroborate these results.

His research was published as an International cover in “Scientific American.” He served as an ad-junct Faculty with the New York University, and was awarded the A C Banerji Gold Medal and Lec-ture Award by the National Academy of Sciences, India, along with many other awards. He holds visiting faculty positions in many reputed universities and has won fellowships in various scientific academies. His research papers and monographs are widely cited internationally. His recent book, The Story of Collapsing Stars (Oxford University Press), explores the death of massive stars and the subsequent formation of black holes or naked singularities through gravitational collapse of stars.