How to Be a Know-It-All (For Real)

Omniscience, the ability to know everything, has a strong spiritual tradition, which places it as a divine quality, not a human one. In secular society, artificial intelligence grabs headlines while omniscience, except for those who believe in an all-knowing God, is an archaic notion. But there’s a reason why omniscience arose in the first place, and its possibility turns out to be very human.
What makes omniscience sound preposterous to a rational skeptic is ingrained in our habits of knowing. We know things one at a time. This holds true for things “out there” like mountains, flowers, and stars, as well as things “in here,” which include thoughts, images, and sensations. One-at-a-time knowledge can’t be omniscient, obviously. But instead of closing the argument, is there a kind of knowing that isn’t one at a time? Clearly there is. Do you know what is meant by “colors”? Of course, and you know colors as a concept that covers individual hues like red, green, blue, etc. There are also intuitive qualities like love, truth, beauty, and creativity that we know without having to tick off one example at a time. 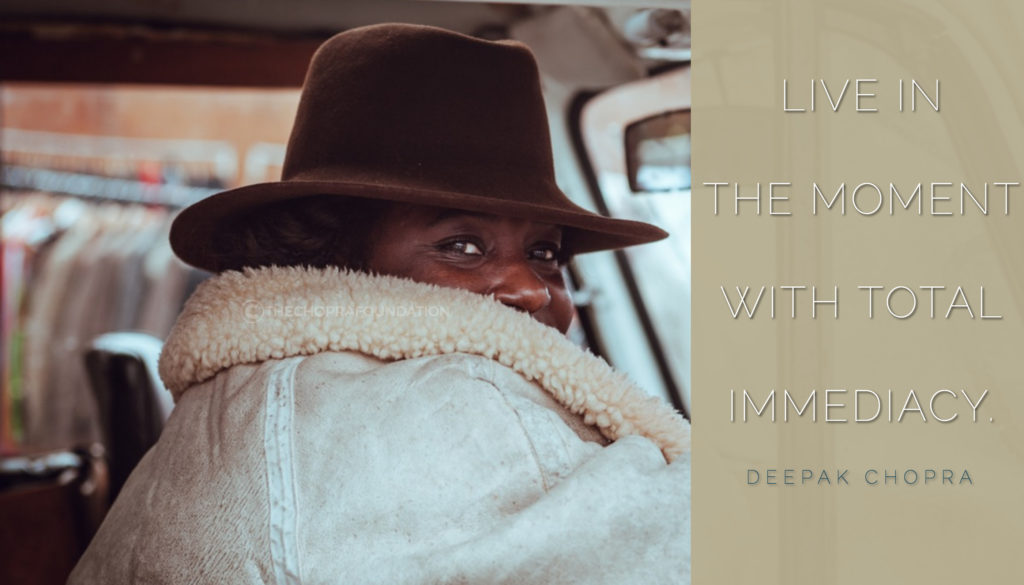 This may sound like something too abstract to make a difference in daily life, yet imagine being a child who believes that movies are real. This illusion melts away once he is shown a projector and the light that emanates from it. Once he knows how movies are made, the child doesn’t stop going to them in disgust at being fooled. Instead, a new world—the making of movies—is potentially open to him when he grows up. Likewise, when everything we assume to be real—objects in here and out there—are shown to be real only because we experience them, new creative possibilities open up—that is ultimately why enlightenment is called waking up.
What blocks us from stepping into this awakened (i.e., non-illusory) state is that we give a privileged position to our bodies—no matter how convincing it is to break a rose down into the experience of light, texture, color, scent, etc., all of which are human-centered, breaking your hand down into the same thing feels wrong—but it isn’t. Think of an infant who doesn’t know the concept of “hand.” He experiences a soft, pink, fleshy object floating in his field of vision, and only after gaining control of it and learning that this floaty thing is a “hand” does it become a privileged part of the body.

It’s hard to see that your body is just a mode of knowing like any other, fitting into the big reality, which consists of other modes of knowing. The mode of knowing the body is rich with sensual perception tied to the infinite wealth of mental activity, while a rock falling on your foot is a much cruder, simpler mode of knowing. Mathematics is a very complex mode of knowing that bears little resemblance to how spaghetti tastes or how love feels. But no matter what corner of reality you investigate, as far away as the newly discovered seven planets orbiting a nearby star or a single bacterium settling on your skin, the common denominator of knowing and experience can’t be subtracted.
Now, why does this fact pass the “So what” test? In one way, it puts the creation of personal reality into each person’s hands, which is why the metaphor of waking up is so often used—obviously it’s better to be awake than asleep. One of the reasons creative people love their creativity is that they feel free of old concepts, liberated to move into new territory in their art. The world’s wisdom traditions go a step further. They advise us to be free of concepts altogether—in other words, to live in the moment with total immediacy.
Yet there are two deeper reasons to adopt this notion that reality isn’t the same as the words and concepts we apply to it.

The first reason comes from Lord Krishna in the Bhagavad-Gita when he declares, “I am the field and the knower of the field.” In other words, the essence of being conscious is to realize that pure knowing, also called witnessing awareness, is who youare. It’s not a skill, talent, gift, attribute, or add-on. It’s you, the unchanging, unborn, undying witness that exists in every experience. To live as the witness brings an end to illusion, including the illusion of death, fear, and suffering.

The second reason for redefining reality in such a radical way, shifting everything to the knower, is contained in an ancient Indian teaching, “Know that one thing by which all else is known.” This “one thing” can’t really be a thing but instead is the key to omniscience. The “one thing” is awareness itself, and it holds the key because in awareness everything we actually want from life—love, compassion, intelligence, evolution, creativity, and inner peace—begins and ends in consciousness. The reason God is called omniscient is naively believed to be factual knowledge, like a cosmic “Okay, Google.” In fact, God is omniscient because the essence of all known things has its source beyond physicality. There’s no need to use religious language to search for this source since it is within us. This concept is explored in great detail in my new book, You Are the Universe , written with physicist Menas Kafatos.
Clearly this explanation of reality as an activity in consciousness won’t hold water until the individual undergoes a journey to prove if it is valid or not. That journey is invaluable, the great object of human existence, and every step on the way makes life more worth living.