The Most Revolutionary Idea Is Here—and It’s Catching On 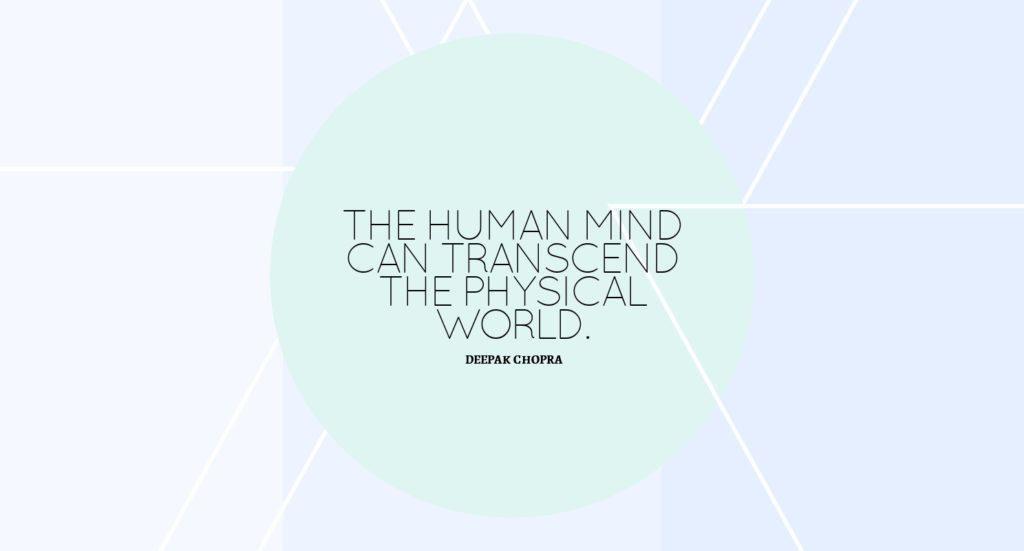 In a news-driven society more attention is paid to events that will soon fade away than to ideas that could alter civilization. Modern secular society needs the impetus of great ideas to add meaning and purpose to our lives, as religion once did when it was the dominant force around the world. In turbulent times the prospect of a single idea that can transform humanity seems remote.

But just such an idea has arrived. It travels under various tags, the most common being “the one mind.” It’s the notion that there is only one mind in the universe despite the appearance here on Earth of seven billion minds. On the surface the radical possibilities stemming from “the one mind” aren’t obvious. In fact, the last thing anyone would want to give up is the claim to be a unique individual. That’s not what the one mind is about—it’s about expanding into higher consciousness as a practical reality. If humanity shares one mind, and this mind has a cosmic dimension, the very idea begins to cause one’s consciousness to expand.

Radical ideas are rarely new, and in the history of religion there has always been the concept that everything is happening in God’s mind. Without religious overtones, the one mind brings in attributes once considered divine, such as omniscience. An all-knowing god is remote; an all-knowing consciousness that you are part of is intimate. In place of divine omnipresence, the one mind brings timelessness down to Earth as a human attribute.

Can you in fact feel the effect of being timeless and all-knowing? There’s a wealth of tradition behind the possibility that the human mind can transcend the physical world, reaching a domain of higher reality. Undertaking the journey to reach that reality is at once an ancient challenge and a contemporary one. The one mind isn’t about inflating our sense of self-importance. You can’t experience what it means to be timeless and all-knowing as if those traits belong to the individual ego personality. “I” is a limiting concept. By transcending the everyday mind you get a glimpse of your source, which is where the timeless and all-knowing originate.

The point is to base reality, including your personal reality, on consciousness. That’s a radical departure from the official story that human beings are essentially physical, with the evolutionary add-on of a higher brain. When the one mind becomes the official story, all of life finds the same foundation in cosmic consciousness. There is no longer higher and lower life but one life that must be cherished and seen as a whole. At the very least, adopting this view can make saving the planet more central to everyone’s purpose. Clearly the crisis of climate change only deepens the longer we believe in separation between nations, belief systems, and individuals.

It would sell the one mind short, however, to call it a viewpoint or a story. What’s at stake is the hidden reality that humans have continually glimpsed and yearned to reach. It’s the realm of peace where there is no fear of death because death doesn’t exist. It’s the beginning of creation and the end of suffering, because suffering is caused by creation gone awry.

Ours would seem to be the last era when such a vision can reach fulfillment, but in the long view it was necessary to bring the one mind down from myth and mysticism. Science needs to confront nature head on and affirm that the one mind is real. Huge steps have been taken in this direction. Almost a century ago a quantum pioneer like Erwin Schrödinger affirmed that consciousness was one and indivisible, and another genius in physics, Werner Heisenberg, asserted that physical reality cannot exist without the interaction of an observer.

Despite these radical insights, or perhaps in defiance of them, physics has clung to the idea that nature is what is seems, a given that cannot be challenged. Now the challenge has not only arrived but is making headway. Serious consideration is given to the concept of one observer in the universe, and after decades of failing to show that mind can be created through physical processes, the idea is rising that the cosmos has always been conscious—mind is a feature as innate to creation as gravity or the speed of light.

I’m barely touching upon the explosive implications of the one mind. (Anyone curious to read a complete in-depth treatment should consult Larry Dossey’s riveting book, The One Mind” How Our Individual Mind Is Part of a Greater Consciousness.)  Science is poised to go in an intriguing direction, but where I feel the most hope, and genuine confidence, is in the future of spirituality and personal evolution. Without transcendence, we are stuck in the domain of separation. Body and mind inhabit separate compartments, and within the mind there is a war of opposing impulses, feelings, and thoughts.

The prevailing attitude is to live with the divided mind, protect yourself form the worst aspects of human nature, and boost the self-interest of “I, me, and mine” as far as you can. At best this strategy has left us feeling insecure and dissatisfied. At worst it has led to the catastrophes of war, xenophobia, and the specter of an environment damaged beyond repair. The primary attraction of the one mind is that it heals everything created by the state of separation. In itself, that is enough to create a new future. Who would settle for the old one that is looming before us when healing and renewal have arrived to save us from ourselves?