Where Do You Call Home? A Cosmic Answer

Home is a charged word for everyone, a source of emotion that’s intimately associated with feeling safe and loved, of belonging. When asked “Where is home?” people reply with a country or city, perhaps a specific street address. Almost no one says “My home is the universe.” But for scientists trying to explain cosmic issues, the fact that the universe is the ultimate home where human life arose poses some huge mysteries. In our book You Are the Universe , we explore these mysteries, but that’s really secondary to something more important. We aim to show that the universe exists to be the home of human beings.

In other words, we take the universe personally. Such a position sounds at first blush like a totally wrong-headed stance. The universe, whether viewed by the naked eye or through the Hubble telescope, presents itself as a vast space where some three trillion galaxies, by the latest estimates, are rushing away from one another at high speed, where spacetime is being stretched out, carrying along every object embedded in it. This picture is so well established that many people, including trained physicists, assume that new discoveries will basically just fill in the blanks. It’s not as if we need a totally new definition of the cosmos.

But in fact we do, and there’s a growing sense among scientists that this is true. Even those who accept the inflationary model of the universe (a model based upon the reality of the big bang 13.7 billion years ago) realize that the fundamental components of reality–space, time, matter, and energy–remain mysterious. In fact, it’s the breakdown at the most fundamental levels that causes the universe to be very different from what the eye or telescope sees. 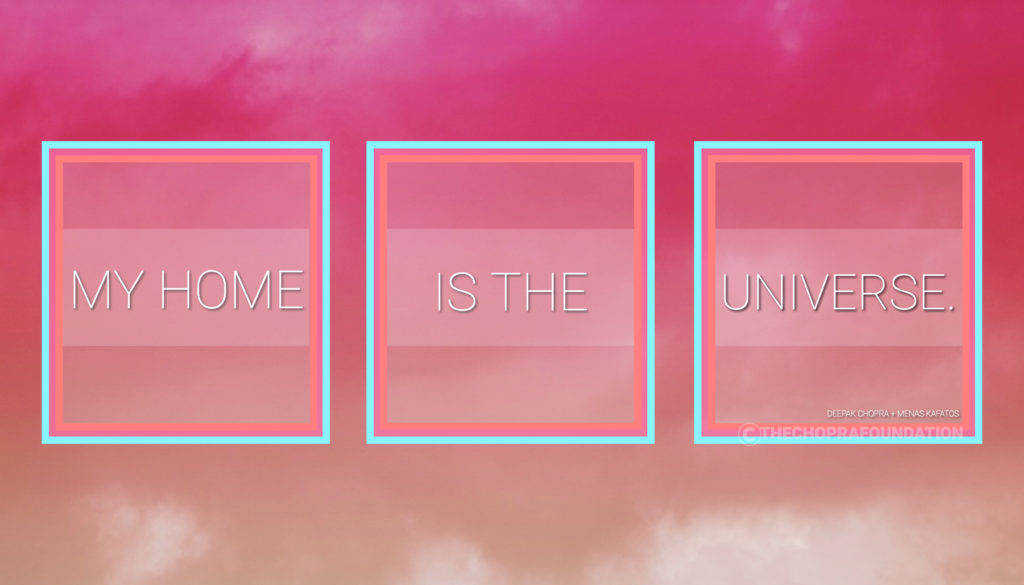 The word “breakdown” must be taken seriously here. The New York Times ran an article over a year ago on the crisis in physics, and quite publicly Stephen Hawking has been exploring the a cracks in a unified Theory of Everything (the holy grail of physics at least since the lifetime of Einstein). Hawking is prone to quotes like the following: “I don’t demand that a theory correspond to reality because I don’t know what it is. Reality is not a quality you can test with litmus paper.” The fact that the most advanced theories about space, time, matter, and energy don’t necessarily match reality opens the way for looking at reality very differently.

Our different view is that the universe is trapped in a paradox. On the one hand, everyone holds that the universe developed after the big bang in keeping with random events, whether those events are the collision of two helium atoms or two galaxies. There is no plan or design, no predetermined purpose in creation, and ultimately no meaning to why things happen as they do. On the other hand, and this is where paradox reigns, the universe is the perfect home for human life to have evolved on Earth. In fact, the universe is so incredibly precise in allowing life and intelligence that randomness just does not fit the bill.

The evidence for this side of the paradox begins with what is known in cosmology as the fine-tuning problem. After the big bang, there was a precarious balance of natural forces. Given a change one wayor another by less than one part in a billion, the infant universe could have collapsed in on itself or, at the opposite extreme, flown apart so fast that atoms and molecules would never had developed. If the laws of nuclear physics were slightly different, a collapsing supernova could not occur and the heavy elements which are essential to our bodies could not have formed in the cauldron of stellar collapse. Other more arcane disasters and distortions were also possible, but the upshot is that the constants that keep the universe intact are meshed together so finely as to defy any random explanation.

Human life needed a home to evolve in, meaning a planet, which in turn needed a solar system, which in turn needed stars, interstellar dust, viable stable atoms, and so forth, all the way down the line to the big bang. It’s very suspicious that there were no hitches along the way. Very small hitches would have made it impossible for the most complex molecule in the known cosmos–human DNA, with its 3 billion base pairs–to evolve.

To compound the paradox, there are other enormous gaps in the models we apply every day to explain reality, among them:

Our book delves into the details of these baffling mysteries, but where a physicist might consider them abstract puzzles to which advanced mathematics must be applied, the mismatch between theory and reality concerns everyone. We don’t know why the universe is our home or even what “home” means in the larger sense. No one would put money down on a house built of materials the builder can’t describe or tell where they came from. Yet we have bought into a conception of the cosmos with exactly those flaws. In fact, far from looking out at a physical universe filled with stars the way a box of chocolates is filled with truffles, we are actually looking out at a conception, a human artifact that we alone are responsible for. That’s a mystery worth pondering if we ever hope to find out who we really are.

Menas C. Kafatos is the Fletcher Jones Endowed Professor of Computational Physics, at Chapman University. He is a quantum physicist, cosmologist, and climate impacts researcher and works extensively on consciousness. He holds seminars and workshops for individuals, health and mental professionals, practitioners of contemplative traditions, and corporations on the natural laws that apply everywhere and are the foundations of the universe, for well-being and success. His doctoral thesis advisor was the renowned M.I.T. professor Philip Morrison who studied under J. Robert Oppenheimer. He has authored 315+ articles, is author or editor of 16 books, including The Conscious Universe (Springer), Looking In, Seeing Out (Theosophical Publishing House), and is co-author with Deepak Chopra of the forthcoming book, You Are the Universe (Harmony). He maintains a Huffington Post blog. You can learn more at http://www.menaskafatos.com