Will the Gut-Brain Connection Revolutionize Wellness?

Three decades ago, the brain lost its sovereignty as the seat of thinking, feeling, and the operation of intelligence. In fact, those processes began to escape the confines of the nervous system itself. All of this occurred when it was discovered that various “messenger molecules” associated with the brain are in fact circulating throughout the body via the bloodstream. Every cell is eavesdropping on the brain’s activity, sending and receiving messages identical to those that the brain processes.

Over the next three decades, the realization that what we dub “intelligence” is a holistic feature of the body, the main difference being that outside the brain, this intelligence is nonverbal. The immune system’s incredible ability to identify and combat invading bacteria and viruses, in fact, has earned it the nickname of the floating brain. Everywhere researchers looked, new avenues were opening in a virtual information superhighway that reaches everywhere, and now it is possible to redefine wellness in terms of a “whole system” approach that has no need to recognize the artificial boundaries between brain and body, neurons and other cells, or even the distinction between human DNA and the countless other microbial genes that reside inside us. 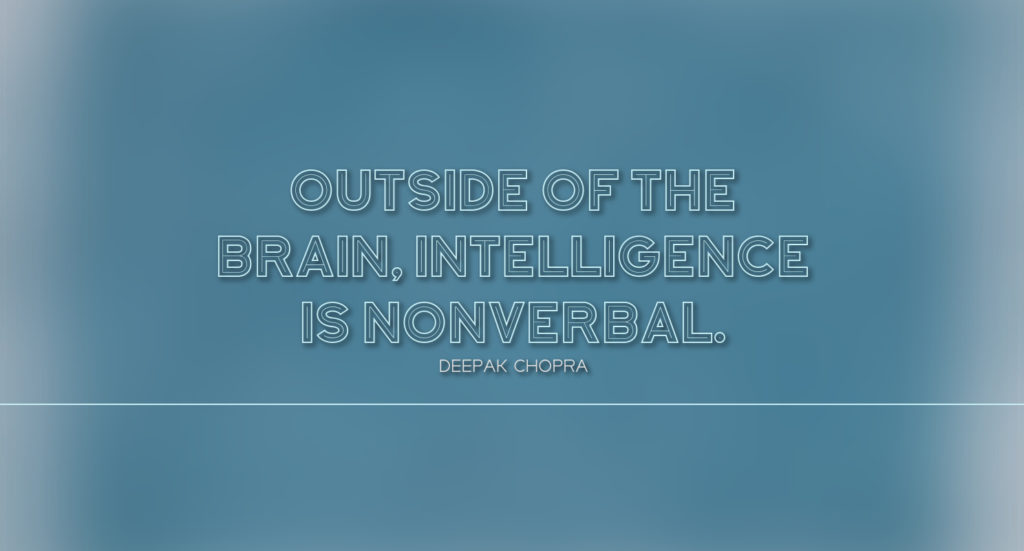 Some of the most far-reaching research centers on the so-called brain-gut connection. Without realizing it, you are experiencing this connection during any of the following common experiences: Getting butterflies in your stomach when you feel nervous, overeating when you feel anxious, feeling dull and sluggish after taking an antibiotic, contracting stomach cramps before a competitive challenge, experiencing nausea or stomach upset from taking antidepressants. These are all evidence of the intimate connection between brain and gut that we ordinarily do not notice.

From before the time you exited the womb, your body was forming an intimate and unbreakable connection between your brain and your gut, including the liver, pancreas, stomach, intestines—in fact, every organ inside the body cavity. Collectively, your gut and all the organs it contains are referred to as the “enteric nervous system,” which actually contains 200-600 million neurons! The enteric nervous system is in essence a second brain because of its ability to operate on its own while communicating with the central nervous system. The main connection is through the vagus nerve, which leaves the brain, descends to the heart, and then weaves throughout the body.

But that’s not all. The gut-brain connection also includes trillions of living microorganisms called “microbiota” whose DNA forms a parallel genome—in fact, thousands of genomes—that are not invaders but an innate part of the body. Nearly four and a half pounds of bacteria and other microbes exist in your gut at any given time. Together, these microbiota, your enteric nervous system, and the vagus nerve are responsible for 80% of the signals sent from body to brain, and there is strong evidence that this second brain can drastically impact your mood, behavior, hunger level, and much more.

In new medical research that has developed over recent years, scientists made the striking discovery that people who suffer from such conditions as depression, anxiety, and bipolar disorder show higher levels of inflammatory substances in their blood indicating that their bodies are in a state of chronic inflammation. Chronic inflammation occurs when immune cells throughout the body release pro-inflammatory substances, including toxic molecules that can flood the brain. Chronic inflammation has a master controller, the second brain we’ve been discussing, including the microorganisms living in your digestive tract.

These vast colonies (dubbed the microbiome), which are unique to each person and exquisitely sensitive to diet and other lifestyle factors, communicate constantly with your immune system. This means that by caring for the gut microbiome, it is possible to stop chronic inflammation and potentially halt disturbing brain activity. Alternatively, brain problems can potentially be caused by not taking care of or paying close attention to the health of your microbiome. For example, specific gut microbes are involved in the production of many neurotransmitters–the chemicals your brain and nervous system use to communicate with the rest of your body, but also to regulate mood and behavior.

While there are a variety of blood, saliva, urine, and stool tests that can evaluate your gut and the various indicators we’ve been describing, most fail to give you a full picture of everything that’s going on inside your digestive tract. Fortunately, a technology originally designed for the national security at Los Alamos National Lab and recently licensed by Viome has allowed for a way to test your complete microbiome, allowing you to determine what type of foods to eat in order to support your microbiome. You can discover which bacteria, viruses, yeast, fungus or mold are present in too great quantities, which need to be replenished, and which markers of chronic inflammation are present in your gut. (Full disclosure, one of the authors, Naveen Jain, is founder of Viome.com, a company that provides complete insight and recommendations directly to you without any doctor’s prescription.)

As it becomes feasible to analyze the complex operation in the gut and its connection to the brain, a revolution is taking shape. With unprecedented data processing and the use of artificial intelligence, along with future price reductions, the science is reaching a tipping point. Knowing how your gut microbiome is doing will one day become as standard as taking your blood pressure. For the moment, addressing inflammation and returning to a healthy state of the gut-brain connection can be addressed with a sharper focus on stress reduction and consuming a natural whole-foods diet. Those factors will remain the same, even as medical research fine- tunes the best approach for personalizing how to care for our second brain.

Deepak Chopra MD, FACP, founder of The Chopra Foundation and co-founder of The Chopra Center for Wellbeing and Jiyo.com, is a world-renowned pioneer in integrative medicine and personal transformation, and is Board Certified in Internal Medicine, Endocrinology and Metabolism. He is a Fellow of the American College of Physicians, member of the American Association of Clinical Endocrinologists and Clinical Professor at UCSD School of Medicine. Chopra is the author of more than 85 books translated into over 43 languages, including numerous New York Times bestsellers along with You Are the Universe (February 2017, Harmony) co-written with leading physicist, Menas Kafatos. Other recent books include Super Genes co-authored with Rudolph E. Tanzi, Ph.D. and Quantum Healing (Revised and Updated): Exploring the Frontiers of Mind/Body Medicine. www.deepakchopra.com

Naveen Jain is an entrepreneur driven to solve the world’s biggest challenges through innovation. He is the founder of several successful companies including Moon Express, Viome, Bluedot, TalentWise, Intelius and InfoSpace. Moon Express is the only company to have permission from the US government to leave earth orbit and land on the moon. Viome is focused on disrupting healthcare with the goal of “making illness elective” by identifying biomarkers that are predictive of chronic diseases and preventing them through personalized diet & nutrition. Naveen is a director of the board at the X PRIZE Foundation and Singularity University. He has been awarded many honors including “Ernst & Young Entrepreneur of the Year”, “Albert Einstein Technology Medal” for pioneers in technology, “Humanitarian Innovation Award” at the United Nations, “Distinguished Global Thinker Award” by IILM, and “Top 20 Entrepreneurs” by Red Herring.