Radical Well-Being: Where We Need to Go 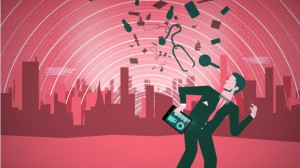 As far as our health goes, America is about a little of this and a lot of that. The little is self-care, the lot is drugs and surgery. Thirty years after a mind-body revolution took place in medicine and fifty years after the Surgeon General launched a prevention campaign against smoking, the public hasn’t fully embraced the simple, unalterable fact that doctors aren’t responsible for the well-being of their patients. Self-care is the one need no one can afford to ignore.

Self-care is a better term than prevention.  First of all, it’s positive – you take steps to insure a better lifestyle, not simply to ward off disease. Second, self-care proceeds on every front that creates well-being: physical, emotional, spiritual, and environmental.  If you attend to your own well-being by taking advantage of the latest medical findings, a leap is possible into a higher state of health that can be termed radical well-being.

Radical well-being is founded on burgeoning evidence that the mind is the key to health. Let me sketch in the main points. They make a long list, but each point is a single piece of the puzzle. When all are fitted together, the picture that emerges is of radical well-being, not as a new label for prevention but as a reinvention of the human body.

We’ve offered these points in the broadest, most general terms to bring out the one thing they all have in common:  Mind is the key. Moment by moment, second by second, you can’t make a single choice or decision, except though the mind. And every thought, it turns out, is actually a decision. Each mental event gets translated into a bodily change, via the brain as the mind’s physical processor, and each message is either positive or negative.

Through the everyday operation of the mind, a system of feedback loops is reinforced, taking a term from computer science that says, essentially, “Input and output are self-reinforcing. The better the input, the stronger the feedback loop.”

Since every cell operates through feedback loops, there can be only one conclusion. Mental activity creates our personal reality. Thoughts, feelings, sensations, and images – the content of your mind every moment of your life – gets translated into the structure and activities of your cells. It has taken decades for “hard” science to support this conclusion, but by it is now becoming incontrovertible. Right down to the genetic level, your mind is telling your body how to live.

The reason for calling this new model radical well-being is that unlike conventional well-being, making choices isn’t optional. Every thought invisibly encodes a biological choice, pointing to a positive outcome (well-being) or a negative one (imbalance, physical decline, disease, or death).  That our cells change by the instant holds the key to a higher state of health. (If you want to see what your thoughts were like yesterday, look at your body today. If you want to see what your body will be like tomorrow, look at your thoughts and feelings today. Pay attention to how you are reacting to your world.)

The medical technicalities are still being worked out, but the good news is that we now have a new model for the good life.  The path is open to enjoy an energetic body, a restful and alert mind, and lightness of being at all times.  Recent data from the Gallup Organization shows that our physical and mental well-being is spread out into the most critical areas – career, finance, community – that can be quantified. In other words, the barriers between “in here” and “out there” are artificial. To thrive in your outer life is a state of well-being that begins with your inner life.

For a new model to replace the old, there has to be a strong challenge to conventional wisdom. In the next part of this post I’ll outline the rapid decline of conventional medical thinking, giving us a second argument for adopting radical well-being, centered on self-care, as the best way forward. Health isn’t static. It evolves, like life itself. The seed of an evolutionary leap is already ours if only we pay attention.

Deepak Chopra, MD is the author of more than 75 books with twenty-two New York Times bestsellers including What Are You Hungry For?  Join the weightlessproject.org to eradicate obesity and malnutrition. For more interesting articles visit The Universe Within