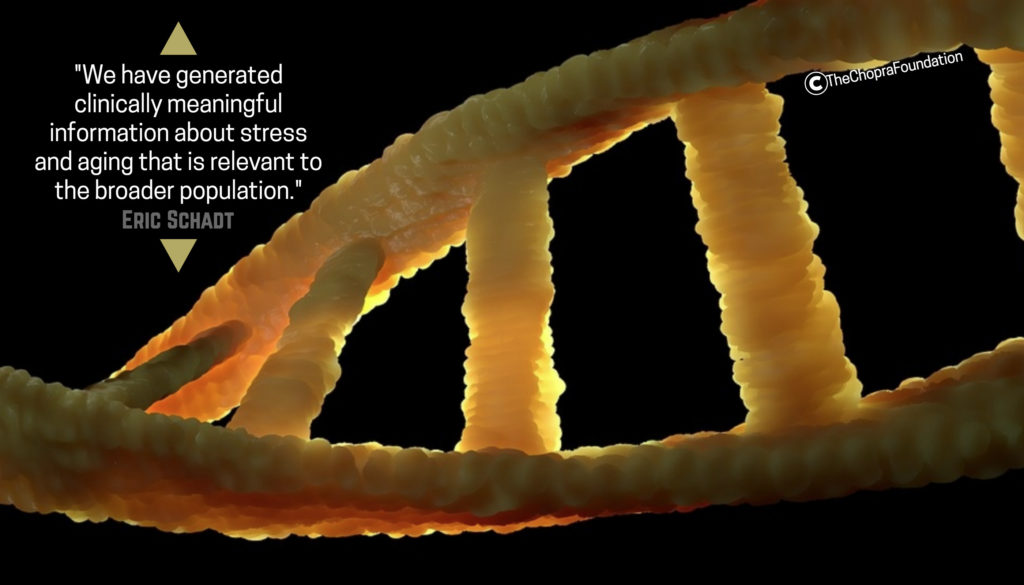 This week some exciting news has come out about the effect of meditation on personal wellbeing. Adding to the mounting evidence that meditation has a number of beneficial effects on things like blood pressure and depression, what’s crucial in the new study, which just appeared in Springer Nature’s journal Translational Psychiatry, is that meditation actually causes changes at the deepest level, in our genes. The study was top level, involving scientists from the Icahn School of Medicine at Mount Sinai, the University of California, San Francisco, and Harvard Medical School. Before detailing the research, let us paint the broader picture, because that’s where the real breakthrough is occurring.

Potentially the most fruitful discovery in medical science over the past two decades has been occurring at the genetic level. The standard view, ever since the mapping of DNA in the early 1950s, was that our genes are fixed and unchanging. Whatever the 20,000-25,000 genes we inherited from our parents at birth, these remain permanently with us throughout life. That part hasn’t changed. No one gains or loses a gene after conception. So how could the picture change?

Leaving aside random mutations (the cause of cancer in a cell), the fixed nature of our genes cuts off any chance of evolving after we are born. Evolution is a slow process involving millions of years of random mutations coupled with selective pressures. Most mutations die out quickly because they adversely affect our fitness, or they are randomly fixed because they are neutral (offer no benefit but also cause no harm). But there’s another side of the story, known as gene expression, i.e. the activity of the genes. DNA turns out to be incredibly dynamic and responsive to a person’s lifestyle. Genes regulate every chemical reaction inside a cell, and as a result, thousands of variations in gene activity are possible. You can think of genetic switches operating like rheostats rather than on-off switches. Or there’s an alternative image of a jukebox sitting in the corner. The jukebox is fixed in place, yet it can play many records, and each record contains a different message.

The big question, then, is how to get cells to send and receive the most positive messages. “Positive” means a response that enhances the life of a cell, which is how the life of tissues and organs improves, and from there the life of the individual. It would be tremendous if a person can make choices that lead immediately and directly to enhancing bodily functions from the genetic level. In fact, this is what the new study confirms. We quote directly from the press release from Mt. Sinai in New York:

The study involved 94 healthy women, aged 30-60. Sixty-four women were recruited who were not regular meditators. Participants stayed at the same [La Costa} resort in [Carlsbad] California for six days, and randomized so that half were simply on vacation while the other half joined a meditation training program run by the Chopra Center for Wellbeing. The meditation program included training in mantra meditation, yoga, and self-reflection exercises. It was designed by Deepak Chopra, MD, who did not participate in data collection or analysis.

For greater insight into the long-term effects of what scientists dubbed the ‘meditation effect’ compared to the “vacation effect,” the team also studied a group of 30 experienced meditators who were already enrolled in the retreat that week. Researchers collected blood samples, and surveys, from all participants immediately before and after their stay, as well as surveys one month and ten months later.

The research team examined the changes in 20,000 genes to determine which types of genes were changing before and after the resort experience. Scientists performed an integrative transcriptomic analysis, comparing gene expression networks across all three groups of participants and finding unique molecular profiles and pathway enrichment patterns. Study results show that all groups — novice meditators, experienced meditators, and vacationers — had significant changes in molecular network patterns after the week at the resort, with a clear signature distinguishing baseline from post-vacation biology. The most notable changes in gene activity were related to stress response and immune function.

Researchers assessed self-reported measures of wellbeing. While all groups showed improvements up to one month later, the novice meditators had fewer symptoms of depression and less stress much longer than the non-meditating vacationers. The psychological effects appear to be enduring and it is unknown how much of this longer lasting benefit may be due to continued practice or lasting changes in how people view events in their lives.

“It’s intuitive that taking a vacation reduces biological processes related to stress, but it was still impressive to see the large changes in gene expression from being away from the busy pace of life, in a relaxing environment, in such a short period of time,” said Elissa S. Epel, PhD, Professor of Psychiatry at University of California, San Francisco and first author of the study.

Although the findings will need to be replicated, this study, which agrees with similar findings about meditation and gene expression, is likely to be far reaching. It is safe to say that meditation is an ideal way to engage in restorative activities that may provide relief for our immune systems, easing the day-to-day stress of a body constantly trying to protect itself. The prediction is that this would also lead to healthier aging.

As promising as that is, the prospect that should excite everyone is that we can self-direct our own biology. Meditation is only one avenue; diet, exercise, stress managements, psychotherapy, and various contemplative practices, Eastern and Western, are beginning to dawn as changers of genetic expression. In other words, your cells are eavesdropping on every part of your lifestyle, responding to what you think, do, and feel. Suddenly there is no longer a gap between mind and body. We have genetic proof that the two are merged into one system, and a “whole system” approach should be taken if we want to thrive throughout a lifetime.

Dr. Rudolph Tanzi is the Director of the Genetics and Aging Research Unit and Vice-Chair of Neurology at Massachusetts General Hospital. He is also the Joseph P. and Rose F. Kennedy Professor of Neurology at Harvard Medical School. Dr. Tanzi discovered several Alzheimer’s disease (AD) genes and directs the Alzheimer’s Genome Project. He is now actively developing therapies for treating AD based on knowledge gained from genetics and lifestyle interventions. Dr. Tanzi has published over 475 papers and has received the Metropolitan Life Foundation Award, Potamkin Prize, the Smithsonian American Ingenuity Award, and was on the 2015 TIME100 Most Influential People in the World list. He also co-authored the New York Times Bestseller, “Super Brain” and “Super Genes” with Dr. Deepak Chopra.