Why Consciousness is Still a Mystery

No one doubts that it’s hard to figure out where consciousness comes from, and when a problem persists for thousands of years—which is literally true in this case—it’s worthwhile sorting out the clues that might lead to an answer. Some are better than others, and a few may be completely false. At the very least, if we can agree on the hottest leads, a final answer may come nearer.

Clue #1: The brain lights up when we think.

Advantage: Watching the brain in action provides the most reliable map to date of how the activity of consciousness is physically processed.

Disadvantage: There is no proof that neural correlates are anything except correlates. They could be symptoms or signs of consciousness rather than the cause. Any attempt to make consciousness physical, in fact, is suspect.

This clue identifies consciousness as an evolved state that begins with primitive instincts and responses in lower animals. As life gets more complex, true consciousness—the human kind—emerged at the top of the evolutionary ladder.

Advantage: This clue places consciousness within the highly successful evolutionary scheme of Darwinism. It becomes a survival trait like other survival traits instead of something unique and mysterious.

Disadvantage: There is no reliable connection between complexity and consciousness. If you add more cards to a deck, that doesn’t mean the deck will suddenly begin to play poker. A theory where consciousness leads the way and physical complexity follows is just as viable.

Clue #3: The physical universe, down to the level of atoms and quanta, exhibits mind-like behavior.

This clue emerged to help make sense of quantum behavior, where non-living things (subatomic particles) appear to make choices and decisions. In the same way, there is something mind-like about how perfectly the universe is fine-tuned, especially as a home for the emergence of human intelligence on Earth.

Advantage: Consciousness may be an inherent property, akin to information, that drives physical systems. It could be incorporated into physical theories about matter and energy.

Disadvantage: Mind-like behavior may simply be a projection created by creatures with a mind (i.e., human beings). An interpretation isn’t the same as an innate property.

Clue #4: Mathematics, being orderly, coherent, and systematic, could offer a foundation for all reasoning and higher mental activity.

This clue appeals to those who want a ba 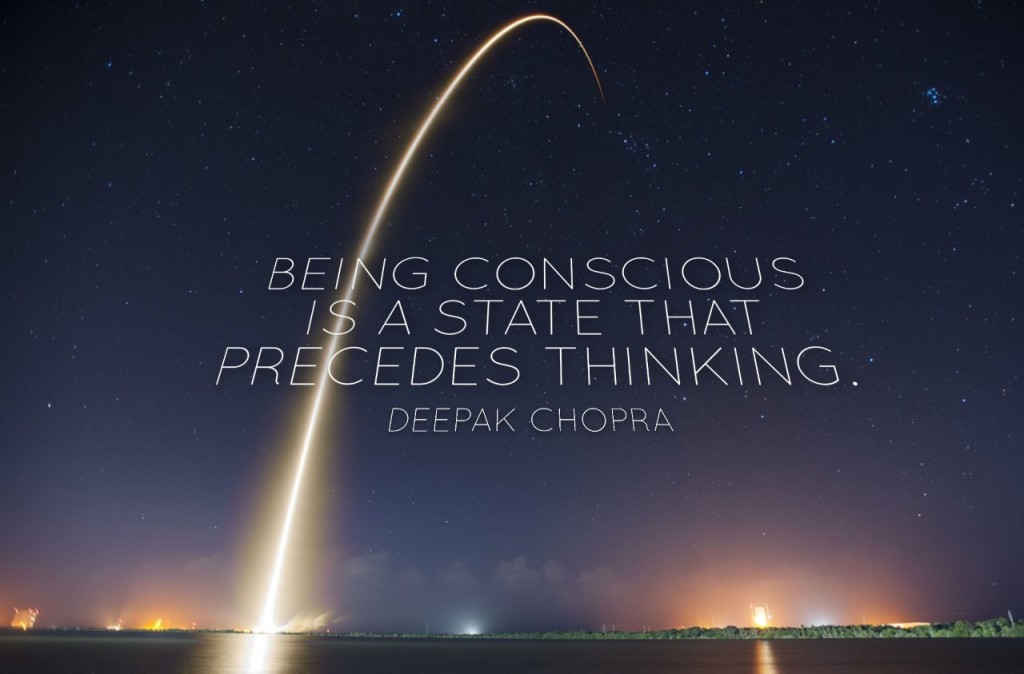 sis for consciousness that isn’t physical, while still connecting it to the physical universe. Mathematics links pure logic and the laws of nature that govern creation.

Advantage: Being inseparable from Nature, math could serve as a reliable origin for consciousness, which is much better than having no origin at all.

Disadvantage: Mind is much more than reason, even more than order, coherence , and the systematic arrangement of concepts. How can numbers be afraid or friendly, for example?

Also, consciousness isn’t the same as mental activity. Being conscious is a state that precedes thinking (as witness the conscious state of a newborn baby).

Clue #5: The human mind seems to be unique in our universe, so far as we presently observe.

This clue allows us to use human consciousness as the gold standard for mind, without having to venture into unknown or speculative territory. Alien minds, animal minds, the cosmic mind—all of these categories can be set aside as incidental to the human mind.

Advantage: If we can understand our own minds, we may understand consciousness itself. “Thinking about thinking” could be the only viable way to get at the problem in the first place.

Disadvantage: Many scientists regard “thinking about thinking” as either totally unreliable or circular. The split between physics and metaphysics has never been settled, and our age, having witnessed the triumph of science and technology, deeply distrusts the metaphysical side.

There are many other clues that could be added to the list, but these five are enough to lead to some critical conclusions. The first is that the advantages of any clue are more or less equal to the disadvantages. A sharp investigator could easily affirm or deny each one. Between them, science and philosophy haven’t managed to indisputably prove even a single clue, a failure which has led to an intellectual power struggle whenever consciousness is confronted as an issue. Among the ancient Greeks, the power went to thinkers; today it has shifted to experimenters. Therefore, in order to get even an inch closer to where consciousness comes

For a very long time the answer to both questions was no. Even though science is obviously a conscious activity, the participation of mind was taken as a given, like the air in the room. Without air you can’t breathe, but that’s irrelevant to whatever research project someone is working on. Another obstacle to investigating consciousness is materialism. It appears on the face of it that physical “stuff” cannot think, and discovering the point at which atoms or molecules suddenly began to think remains improbable, largely because there is nothing—no measurable quantity—for the atom or molecule to acquire. Consciousness isn’t empirical, and its empirical stand-ins, such as brain cells, are unsatisfactory. We can get data out of brain cells, but that doesn’t solve the problem of how “stuff” becomes conscious; it only shows us one place to look. (It could be argued that the atoms and molecules inside the brain don’t become privileged simply by residing there as opposed to inside a rock, sea water, or interstellar space.)

The case for treating consciousness as a scientific puzzle grows worse once you disqualify brain cells as the best clue. The brain is completely silent and dark; therefore, it contains no light or sound, and yet the mind is filled with light and sound, which must come from somewhere.

consciousness is being applied when we think, it’s hard to understand how it could be both the definer of mind and simultaneous the mind itself.

By trying to test the clues that might lead to a solution about how consciousness arose, we wind up with a surprising conclusion. One camp, which says that matter must precede the emergence of mind, is just as wobbly as the opposite camp, which holds that matter was created by some kind of universal mind. These are the “mind first” and “matter first” models, one metaphysical, the other physical. Both depend on assumptions that cannot be proven. An absence of reliable proof is unacceptable to either science or philosophy; therefore, the only reasonable tack would be to find an answer that avoids the either-or of “mind first” and “matter first.” This alternative is forced upon us when choosing between two dominant worldviews, physical and metaphysical, leads nowhere. (Of course, partisans of “matter first” and “mind first” will feel free to stoutly defend their worldviews regardless of anything being said here.)

The alternative to an either/or position must be a sort of both/and, or in other words a choiceless reality that contains, embraces, and transcends mind and matter both. Quantum physics and recent cosmology have led us, sometimes kicking and screaming, to the threshold of the inconceivable, a realm of Nature where the human mind cannot venture in its customary way. The pre-created state of the universe resembles the quantum vacuum in radical ways: both domains are (it is supposed) unreachable by observation, dimensionless, or else filled with nearly infinite dimensions, and beyond the four ingredients that make possible the existence of a brain, namely, time, space, matter, and energy.

Attempts to preserve time-honored scientific assumptions break down at the threshold, although strenuous efforts are made to preserve a scientific model of reality through advanced mathematics, superstrings, quantum gravity, the multiverse, etc. Besides falling woefully short

as conventional science (since the pre-created state yields no data, measurements, viable experiments, or direct participation of any kind. It is entirely inferential.), the current view of reality, not just of consciousness, seems to contain all the weaknesses of metaphysics as well.

Without taking sides on any theory about consciousness or even the relationship between mind and brain, a new set of clues is called for that conforms to current findings in science. Science may be dealing in defective models, but it is still our common starting-point for explaining reality.

New clue #1: Consciousness acts as if it is self-organized, self-governing, and self-maintaining.

New clue #2: There is no substance or force that precedes the appearance of consciousness at any point in the evolution of the cosmos.

New clue #3: It is impossible to separate the mind-like behavior of subatomic particles from the actual operation of mind as experienced in everyday life. They are aspects of the same phenomenon.

New clue #5: The qualities or qualia of experience are irreducible to physical building blocks or mental precursors. Therefore, it is reasonable to suppose that these qualities are inherent in consciousness and derive from a “pure’ form of consciousness.

In the current semi-chaos of speculation about how matter relates to mind, even the most self-evident clues will not satisfy everyone. But there is one sobering thought that everyone needs to ponder. Until some set of clues is settled upon, all possible answers will be

speculative at best and arbitrary at worst. Reality deserves better than that, which is probably what reality has been saying to us all along.