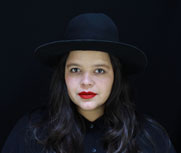 A native of Peru, Ana Calderon was born into a culture of music and art. With her father being a seventies psychedelic musician, and her mother an American artist, she grew up with an insight many don’t experience at such young age. Immigrating to Kansas when she was 6, heavy into rock and pop music by high school – she knew her place was in music.

The past two years have been breakout years for Ana, traveling the globe, DJing events for some of the biggest names in music including Paul McCartney, Radiohead, The Black Keys, Florence & the Machine, The Strokes, LCD Soundsystem, Phoenix, Perry Farrell and MGMT, as well as parties for the MTV VMAS, KROQ Acoustic Xmas, The Grammys, Rolling Stone, Spin, VICE, Nylon, and many more.

In addition, she has performed at the entertainment and fashion industry’s hottest events, with a corporate client list that has included such blue chip brands as FOX, Activision, Levi’s, HBO, Lacoste, Guess, Diesel, Jose Cuervo, Target, Allsaints, Microsoft, Converse, and HTC. Furthermore, Ana is featured in the international fall 2012 Seven For All Mankind Fall Campaign directed by James Franco.

In addition to her one-of-a-kind sets that mix a disparate range of musical genres, from classic rock, to the hottest new indie bands, to select world tunes, soul, hip-hop and pop anthems, Ana is one of the most sought out DJs and considered to be a go-to for talent wrangling. She has DJed with Elijah Wood, Kelly Osbourne, Alexa Chung, Agyness Deyn, Zooey Dechanel, Michael Pitt, Devendra Banhart, and many more, attracting her group of industry influencers to where ever she is spinning. With her beloved HTC One in her hand, her phone book contains the crème de la crème of influencers across a variety of verticals including, James Franco, Adrian Grenier, Kirsten Dunst, Aziz Ansari, Rumer Willis, and many more above the fold names.

With a start in the industry as the label manager at Dim Mak Records, working with Steve Aoki and helping it achieve international acclaim prior to her departure in 2009. Since then, she has immerged as a break-out talent on the music scene.