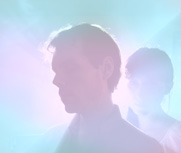 Child Actor is a fast-rising duo that has already produced a wealth of its hypnotic blend of dreamily powerful electronics, R&B and indie rock in a remarkably short period of time. Emerging last year fully formed, they rode a wave of goodwill after digitally releasing a pair of well-received EPs (Partner & Window) for free. Later in 2012 they released their acclaimed debut LP, Victory, and performed their first series of live shows. 2013 has been shaping up to be just as busy, as Max Heath and Natalie Plaza launch their first national tours and put the finishing touches on their followup to Victory.

Heath’s omnivorous, forward-thinking production and Plaza’s innocent, intimate vocals comprise the elements of Child Actor’s singular sound. They set themselves apart from their electronic peers with an unusual depth of songwriting and an uncannily potent sense for human emotion, manifesting an affecting combination of euphoria, nostalgia, melancholy and haunting transcendence.

Upcoming live performances are set to feature Child Actor’s most strikingly emotionally direct material yet, plunging into the sublime fear, pleasure and bliss that can only come from pure, vulnerable love.