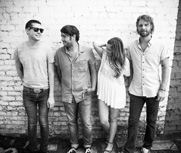 Freedom Fry is the LA based duo of Parisian born, Marie Seyrat, and Michigan native, Bruce Driscoll. Seyrat, who had been singing since before she could talk, initially pursued a career in fashion and styling where she did PR for Gucci and even dressed the likes of Sharon Stone. Driscoll, meanwhile, cut his teeth in the music industry as a producer and touring musician from a very young age. He toured extensively, playing live with the likes of James Iha and Ivy and sharing bills with bands like Stars, Cake, Tahiti 80 and the Trashcan Sinatras.

Fate brought them together when Marie worked as a stylist on a video for Bruce’s other band, Blondfire. “She played me a song with her singing in French while we were on the set. I loved her voice and thought it would be cool to try to write some songs together with somewhat of a French melodic sensibility. That was April. That following August we wrote and recorded our first EP and the following single, Earthquake, in about five days in my apartment in New York.” Bruce recalled. Earthquake, inspired by an actual New York earthquake they experienced, was released on Valentine’s Day of 2012 and received a great critical response to both the song and the self-directed video. It even garnered a single-of-the-week from French music magazine, Les Inrockuptibles.

Soon after the release of their first EP Bruce relocated to California and the twosome did a road trip from NY to LA. Along the way they made a detour and stopped in Fort Sumner, New Mexico at the grave of Billy The Kid. This visit would inspire their following wild west themed EP, Outlaws. The EP featured a reinvented, banjo-driven cover of Serge Gainsbourg and Brigitte Bardot’s Bonnie and Clyde as well as songs about legends Billy The Kid and Jesse James. Jesse James, the single from the EP, was accompanied by a video directed by French director Mark Maggiori (French music fans know his work for the bands Lilly Wood and the Prick and Brigitte) and Petecia Le Fawnhawk.

Their follow up single, Summer In The City, reached #13 on the Commercial Specialty radio charts and was a #20 album. It was also in rotation at over 50 US college stations, including tastemaker station KCRW.
Freedom Fry strive for one main thing, “To create our own musical universe.” Seyrat remarks with her soft-whispery voice with just a hint of a French accent. “We love doing every aspect of the band, from writing and recording to directing and conceptualizing the videos and artwork. We are very much out to do something we haven’t seen yet, even if sometimes that can be difficult. We’re out to prove that there are one or two new things under the sun.” You can see this put into action by the fact that their first EP packaging was in the shape of a French Fry box and their trademark look has become sunglasses accompanied by red, wax lips. Even their name, an ironic FU to US and French relations at the time of the Iraq war, sums up the unique universe that the band has strived to create.

Their latest offering, the Friends And Enemies EP, highlights their recent experimentation with writing Bass-line driven, dark, minimal, organic, danceable songs. The single, Friends And Enemies, is about the beauty and danger involved in friendship and how vulnerable you can become once you open yourself up and fully trust another person.

Freedom Fry’s Friends And Enemies EP was released digitally on April 2nd, 2013. It debuted on the front page of iTunes Alternative in the New and Noteworthy section. It will be released on July 29th in the UK.