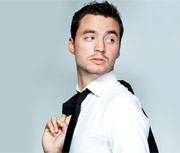 John West (born May 11, 1983) is an American singer–songwriter, R&B recording artist and occasional rapper. Originally from Baton Rouge, Louisiana, West resides in Los Angeles, California where he began to pursue his music career soon after graduating Chicago’s Columbia College. While in Los Angeles, West became a street performer on Third Street Promenade, a popular tourist destination and public entertainment venue in downtown Santa Monica. West played street-side at the Promenade for a year. Then he took off on a road trip to Louisiana for a run of college shows. When a reinvigorated West returned to the Promenade, he was joined by a friend and the latter’s beat machine. In addition to working the Promenade, he began steadily building a fan base on the local indie circuit playing such venues as the Hotel Café and the Temple Bar.

In between West recorded new material for sale on the street and the internet, including a live CD plus EP’s. Six months after his college road trip, he met manager Ben Ricciardi and West began to play to full houses in Hollywood at the Roxy and the Avalon. Word promptly spread about West, and after being invited to New York City to showcase his musical talents with an acoustic performance for Mercury Records President, David Massey, West signed with Mercury/Island Def Jam October 2010. On August 2nd, 2011 West released his self-titled debut EP John West which includes his first single “Lovely” featuring American rapper Pusha T.