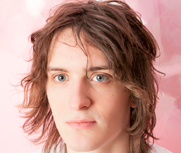 Anyone looking for an all-encompassing statement-of-purpose for SOFT, the hyper-caffeinated new record from Rathborne will find it in the first line of thesecond song when Luke Rathborne – chief songwriter and principle persona – hiccups, “Heard you gotta get it in motion.” From that moment on, SOFT never stops moving bounding from one jagged-edged neo-New Wave song to the next, marrying the fast-and-loose ethos of The Ramones with the coiled neurosis of early Devo and the melodic ease of classic R.E.M. and Tom Petty. “The feeling of the record is incredible energy,” says Rathborne. “Youthfulness, lust — the feeling of breaking out of yourself, unchaining yourself, forcing yourself to be free.”

That same spirit of optimism and restlessness also characterizes Rathborne’s career to date. He learned how to play guitar at age 12, when a stranger who was passing through the small town in Northern Maine where Rathborne lived left the instrument at his house (“There was a lot of freewheelin’ types passing through my house when we were kids,” he chuckles). Inspired by the DIY spirit of punk rock, he recorded his first album, After Dark, when he was just 16 years old, sneaking into the recording studio of his local college late at night and teaching himself how to use the equipment. “I guess ambition when you’re young is really unusual,” Rathborne says, “But I just couldn’t really find a place in high school.” Rathborne relocated to New York when he was just 18, where he connected with famed Tin Pan Alley producer Joey Levine. From there, Rathborne began steadily honing his skills, booking himself a weeklong UK tour, netting a slot opening for The Strokes at South By Southwest and recording the EP I Can Be One/Dog Years, which earned him an appearance on the BBC”s 6 Music. “In the course of making those records,” he says, “I’ve gone from being a 16-year-old kid to being an adult.”

That maturity is evident throughout SOFT, a story of heartbreak and redemption that told in spit-shined Buddy Holly vocal melodies. Produced by Rathborne and Emery Dobyns (Antony & the Johnsons, Battles, Noah & the Whale), with mixing and co-production by Gus Oberg and The Strokes’ Albert Hammond, Jr., the record nestles honey-sweet hooks inside tangles of guitar and Darren Will’s percolating bass. “Some of the punk bands I had been in as a teenager sounded like this, “Rathborne says, “So it’s a ‘return to punk’ for me in some ways.” That comes through in songs like “Wanna Be You,” where Rathborne sighs and pines over a whistling synth line and a taut cluster of guitar that recalls vintage Nick Lowe. “That’s really a song about identity,” Rathborne explains. “It’s about
figuring out why people love each other, why they want to be each other, and when that crosses the line.” “Last Forgiven,” which Rathborne says is about “redemption and yearning,” cruises and dips like a roller coaster going halfspeed.