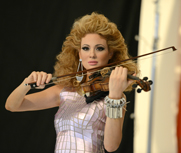 Miri Ben-Ari, a Grammy Award-Winning violinist, composer & producer, Goodwill Ambassador of Music for the United Nations Association of Brazil originally from Israel, has created her own unique sound – a revolutionary fusion of classical soul and dance music. She is recognized as a musical pioneer.

Known for her captivating show-stoppers, Ben Ari has wowed audiences around the world with performances such as: Aventura’s “Sold Out at Madison Square Garden” concert, VH1′s “Save The Music” Gala at Lincoln Center, “Fashion Rocks” at Radio City Music Hall, Sesame Street, Senator Hillary Rodham Clinton’s campaign, Viacom’s Dream Concert at Radio City Music Hall and the Martin Luther King Jr. Presidential memorial dedication in Washington, DC. She was recently invited by media icon Yue-Sai Kan for a special performance during “Miss Universe China” in Beijing, a live broadcast to millions of people.

Ben-Ari has been the face of many promotional campaigns, including; Reebok’s “I Am What I Am” global print and TV advertisements, Vodafone, a Jimmy Hendrix PSA for BET, Pepsi , Coca-Cola and now Harman Kardon (products include headphones and home theatre systems).

Miri Ben-Ari loves to give back to the community and has supported different charitable organizations such as UNICEF, FIBA (Fellowship of Israel and Black America), Phoenix House, NRB Convention and Aglow, the Jewish Federation, Russell Simmons’ philanthropic arts foundation and the Emery Awards. Ben-Ari is the founder and chairman of “Gedenk” (“Remember” in Yiddish), a not-for-profit organization, dedicated to promoting awareness and education to the youth about the Jewish Holocaust.

As a young role model, Ben-Ari has been privileged to receive many international accolades: she was honored as an “Apollo Legend” by the Apollo theater in New York City, “International Jewish Woman To Watch of 2007 Award,” “2008 Israel Film Festival Visionary Award,” the American Society for Yad Vashem Award, “Young & Powerful for Obama” 2011 Rising Star Award, the “Martin Luther King Award” from Israeli President, Shimon Peres and the “2012 Big Vision Awards”.

Her single “Symphony of Brotherhood,” featuring the “I Have a Dream” speech by Dr. Martin Luther King Jr., was the first instrumental single ever to hit on Billboard’s R&B/Hip Hop charts, MTV and VH1.

In 2011, Ms. Ben-Ari was invited by America’s First Lady, Michelle Obama to the White House for a special performance and to be honored as a “Remarkable Woman”.
In 2012 Ms. Ben-Ari was invited to perform for President Barack Obama. She was recently appointed as “Goodwill Ambassador of Music” at the United Nations Association-Brazil