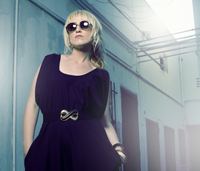 Detroit-bred singer-songwriter MoZella seamlessly blends pop, soul, and jazz into her carefully crafted tales of life and love. Her charismatic vocals and charming personality have earned her the reputation as a fresh alternative to formulaic pop artists. Now based out of Los Angeles, MoZella was signed to Maverick in 2004 where she toured the U.S. with the Dave Matthews Band, Lifehouse, Five For Fighting, Michelle Branch, and Colbie Caillat. She was then signed and released her sophomore album on Universal/Motown Records.

Her songs have been featured in several film and TV series including One Tree Hill, The Hills, The City, Pretty Little Liars, Fringe, Castle, Private Practice, and the teaser trailer for Sony Pictures’ Did You Hear About The Morgans?. Her song “Magic (Oh Oh Oh)” was used in the Verizon Droid commercial, which instantly became a viral hit on the Internet receiving nearly 1.5 million views in its first week. It also won her the BEST SONG in a COMMERCIAL ADVERTISEMANT Award at the Hollywood Music in Media Awards last year. Her song “ Love is Endless” was in the WB movie Life As We Know It and on the soundtrack too. Two of her songs were featured in long running NIVEA commercials. Her song “Feel Alright” was used for the NFL commercials. And her song “This is Love” is being used in a huge JC Penny ad campaign.

She’s recently re-released the album along with three additional tracks on her own imprint Belle Isle Records through Beverly Martel Music. MoZella continues to write for other artists as well as writing and recording new material for her follow up to “Belle Isle”.