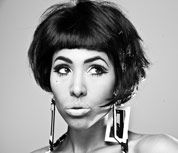 Nikki Jean had an idea. More of a mission, really. She would travel across the country, stopping off in the great music cities, and collaborate on new songs with writers who, by anybody’s measure, would have to rank at the very top of any list of the most accomplished men and women ever to work at the craft and art of songwriting. She’d explain this goal, and her eyes would light up, and you couldn’t help but get drawn into the plan. It seemed so pure, and at the same time, wild and improbable.

Who could imagine this, that an artist whose link to the modern world of commercial pop music was appearing on records by Lupe Fiasco, who was still in her early 20s and had no solo recordings on her resume, would reach out to songwriters such as Jimmy Webb, Carole King, Lamont Dozier, Burt Bacharach, Bob Dylan, and ask them to collaborate, and that so many of them would open their doors? That she could spend weeks in Nashville writing with members of the Country Music Songwriters Hall of Fame like Bobby Braddock, go to Martha’s Vineyard to write with Carly Simon, recapture the sound of Philly Soul with Thom Bell? Get Brill Building writers Barry Mann, Cynthia Weil and Jeff Barry, all now relocated in Los Angeles, to write with her the way they used to write in the cubicles of Aldon Music? It was hard not to get swept up in her enthusiasm, and at the same time, wondering if she’d be able to pull this off.

That was around three years ago, when Nikki and her producer Sam Hollander started talking about the project that is now called ‘Pennies In A Jar.’ Nikki had told Sam that what she had in mind, at first, was a modern version of Carole King’s ‘Tapestry’: an album rich in melody, emotional and truthful, with all the songwriting elements that are in such short supply, even on pop radio, where songs sound assembled out of spare parts that are lying around in the studio, a beat here, a riff there, a lyric idea from somewhere else. Nikki wanted to get back. Sam thought about this, and expanded on it. Why doesn’t she, if she wants to capture that essence of songwriting, work with some of the form’s masters, the architects? Go to the source. So they began this. With the help of publishers Jody Gerson and Marty Bandier, and a contract with a major label, they started to contact a wish list of people to write with. Jimmy Webb, who almost never collaborates, said he would. Burt Bacharach sent Nikki melodies for verses and chorus, and waited for a lyric before sending her the bridge: he wanted to be sure. Mann & Weil welcomed her into their home. Dylan sent her an unfinished song from the ‘Shot of Love’ era, and invited her to complete it. She got to write with Luigi Creatore, whose roots go back to the ‘50s with Sam Cooke, and who wrote for Elvis.

Ultimately, maybe fifty songs were written for this album. What you hear is a compact history of pop: the girl group sound, Motown, the sophisticated melodies of Bacharach and Webb, a place where country literally meets hip-hop, the art of the singer-songwriter. All tied together by Nikki Jean’s warmth, her joy in making this music, her gift to be able to change shape and still stay herself. The challenge for her, and for Sam, was to take all these influences, all this geographical and musical range, and make it flow. To point, in each individual track, to the place it sprang from, and have it fit with the songs surrounding it. To sound, always, like Nikki. They’ve accomplished this beautifully, and anybody who cares about real songs, and who loves discovering something new, and who is dazzled by the names on the songwriting credits alongside Nikki’s, needs to listen.