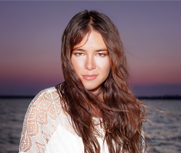 Acclaimed singer-songwriter Rachael Yamagata, ‘the troubadour of heartbreak’, will launch a tour in support of her latest EP, Heavyweight. Digitally released in November of 2012, the Heavyweight EP is now available in stores. Yamagata’s set on the Dealbreaker Heart Tour will be stripped down and intimate, and will showcase her stunning songwriting and the raw emotional power of her songs. Yamagata recently returned from a successful string of SOLD OUT shows in Southeast Asia, with stops in Seoul, Korea, Bangkok, Thailand and Singapore, Singapore.

Rachael Yamagata has garnered pop and indie status alike, having toured with The Swell Season, Ray LaMontagne, Ryan Adams, Sara Bareilles, Liz Phair and Adam Cohen. Collaborations include songs with Jason Mraz, Mandy Moore, Dan Wilson and Katherine McPhee as well as appearances on the records of Bright Eyes, Dave Matthews and Rhett Miller to name a few. She opened solo for David Gray at Madison Square Garden, was the guest of Pete Townsend, shared the stage at Carnegie Hall with R.E.M. and Patti Smith, performed for the President, hosted a tweet dialogue at the White House, and joined Steve Earle, jazz great Allen Toussaint and The Wood Brothers for a tribute show to Woody Guthrie.

The past two years Yamagata has been touring the world in support of her album Chesapeake, had a performance cameo in the new movie ‘Renee’ (the true story that launched the movement TWLOHA). Australia’s The Voice winner Karise Eden reached #1 with Rachael’s song ‘You Won’t Let Me’. Yamagata has had songs placed in the film ‘Hope Springs’ as well as the show ‘Pretty Little Liars’. Appearances on 30 Rock, Carson Daly, The O.C., One Life To Live, Jay Leno and Conan O’Brien and placements in ‘Grey’s Anatomy’, ‘Brothers and Sisters’, ‘The L Word’, ‘How I Met Your Mother’, ‘Prime’, ‘Bella’, ‘Monster in Law’ etc. keep broadening her fan base. Everyone from NPR to Perez Hilton have supported her, famed photographer Jungman Kim calls her ‘his muse’ and writer/journalist/ broadcaster Katherine Lanpher cites her as the only twice invited guest of “Upstairs at the Square” (first with revolutionary novelist Alaa-Al-Aswany – The Yacoubian Building and more recently alongside Bill Clegg – Portrait of an Addict as a Young Man and 90 Days).