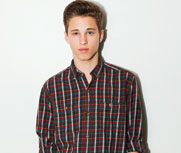 Ryan Beatty, the 17-year-old singing sensation from Clovis, CA has built an uncanny following and buzz within the entertainment industry as its newest breakout star. After being nominated for a Teen Choice Award as “Choice Web Star” in 2012, Beatty released his debut EP “Because of You” exclusively on iTunes. In less than 24 hours, Beatty hit #1 on the Pop Album US Charts, while hitting #7 on the Top Album US Charts on iTunes overall – all without being signed to a label!

Over the last year, Beatty has consistently been one of the most-viewed artists on YouTube and gained a worldwide following with millions of fans. Many top industry influencers have taken notice of the singer, including Ryan Seacrest who supported Beatty by showcasing a series of videos on his website. Ryan’s debut music video to “Every Little Thing” and recent single “Hey LA” received tremendous response from fans, making his videos some of the most popular on RyanSeacrest.com. Ashton Kutcher raved about Beatty’s talents and Justin Bieber performed a cover of Beatty’s original single, showing that at 17-years-old, he is just getting started to be one of the most successful artists in the industry!

Beatty spent most of 2012 touring the US and has played in sold out venues from Los Angeles to New York City. When he isn’t performing around the country, Ryan makes it a priority to give back. This summer Ryan was chosen by AT&T to be one of the faces of their national “It Can Wait” campaign to end texting and driving. His PSA is now airing throughout the US and is educating teens and their parents about the dangers of texting and driving, a cause that Ryan is extremely passionate about. He has joined the movement to end teen bullying, by speaking at schools throughout the East Coast with national organization – Defeat the Label. Beatty also acts as an ambassador for TOMS Shoes participating in “One Day Without Shoes” and raising awareness to support TOMS “One for One” mission.

Beatty’s one-of-a-kind music combines an acoustic sound, mixed with modern old school edge and adds in real instruments for upbeat tempos. His gifted vocal skills and outstanding live performances have proven that he is an exceptionally talented artist in the music industry and there is much more to come from this young star!