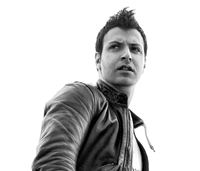 Atlantic Records recording artist Ryan Star has been enjoying the success of his first full-length album “11:59” since it debuted in the Top 10 of Billboard’s Top Rock Albums chart in August. The record features the Top 10 hit single “Breathe,” a powerful rock anthem that has been featured in promotional spots for prime-time shows such as FOX’s “American Idol” and “So You Think You Can Dance,” and NBC’s “The Biggest Loser.”

The video for “Breathe” was also in rotation on VH-1 and made it into the network’s weekly Top 20 Video Countdown. The socially conscious clip features a dozen unemployed individuals with diverse work backgrounds looking for jobs on the streets of New York. The purpose of the video was to assist them in finding work. A website www.breathe4jobs.com was created to alert potential employers to contact the job seekers in the video.

Ryan Star’s current single, “Start A Fire,” is currently working its way up the radio charts. He recently performed both “Breathe” and “Start A Fire” on the Rachael Ray Show and on the CBS Saturday Early Show. Star also recorded “Brand New Day,” a song that earned him a BMI Television Music Award as the main theme to the FOX TV series “Lie To Me.”