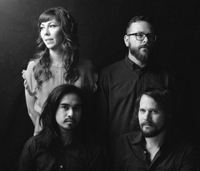 Silversun Pickups is among the most dynamic and creative rock bands of the post-millennial era, hailed far and wide for their inimitable merging of ethereal melodies and pure sonic force. From the indie rock opening salvo of 2005’s “PIKUL” EP to 2012’s visionary “NECK OF THE WOODS,” each successive release has seen the Silverlake, California-based band venture into uncharted terrain, bravely pushing their imagination and ability towards new and surprising summits. Ambitious and anthemic, tracks like “Panic Switch” and “Lazy Eye” have proven indelible classics, a guarantee of rare danger and invention amidst the anodyne dross of much contemporary rock. What’s more, the indefatigable quartet have made it their mission to bring their unique music to the people, touring the planet nearly non-stop to reach a devoted and ever-growing international fan following. Now, as they prepare to embark on their next creative voyage, Silversun Pickups pause for a last look back at the musical milestones that have marked their journey thus far.

“When Dangerbird approached us about doing a singles collection, we said, ‘No way! That’s crazy talk,’” says frontman Brian Aubert. “In our heads, we still don’t see ourselves as a singles band swimming in a singles universe. Our thought is, we’re okay with all of our songs. So it was very important to us that if we were going to do it that we could make it special. With that in mind, we were inspired to go in and record some new songs. Looking back, it ended up being quite positive, almost like a nightcap to the last 10 years…”