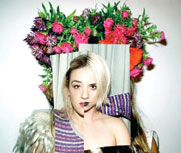 DJ Mia Moretti and violinist Margot met while both performing at the same club on the Lower East Side two years ago. Their act, honed from Moretti’s roots DJing in L.A. and then in New York clubs and Margot’s classical violin training, has taken them from the runways of New York Fashion Week to opening for Janet Jackson at the Louvre. Together, Moretti and Margot were named Paper magazine’s DJ of the Year and have played at Chelsea Clinton’s wedding, Chopard’s 150th anniversary party and Perez Hilton’s “One Night in Austin.” This summer, the duo released their latest single “Summer of ’93” (production by Moretti; vocals by Margot). http://hookedonthedolls.com