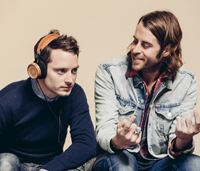 Wooden Wisdom is what happens when Elijah Wood and Zach Cowie play records together.

About Elijah Wood
Elijah has been working as an actor for the past 25 years with credits such as “The Lord Of The Rings” trilogy, “The Ice Storm”, “Eternal Sunshine of the Spotless Mind” and most recently “Maniac”, “Grand Piano”, “Wilfred”, and “Open Windows”.
Announced in early October 2012, Wood, alongside Daniel Noah and Josh C. Waller formed a genre-themed production company. SpectreVision is an independent horror film company with several current projects including “Cooties,” “A Girl Walks Home Alone at Night,” and “Toad Road”
Music has been a deep passion of Elijah’s since he was young, initially DJing as a hobby 15 years ago. Over the last five years his passion for record collecting has grown into dedicated form of expression and extension of his connection to music.

Zach was recently featured on Dust & Grooves www.dustandgrooves.com/zach-cowie-los-angeles-ca/ and you can sneak a peak into his musical diary of 2013 here: www.playitlathes.com