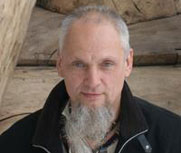 Sinologist and translator of basic Chinese texts (among them the ” Zhuangzi “,” Tao Te Ching “,” Book of Changes “), a writer, public figure. He was born in 1957 in the Far East. In 1979 he graduated from the Faculty of Oriental Studies of the Far Eastern State University. Knows 9 languages, including ancient Chinese language.

Widely known as a writer and translator. He has published more than 40 translations of ancient Chinese texts, “Book of Changes”, “Daodetszin”, “Chuang-tzu,” Confucius “Lun Yu”, “A Treatise on the Yellow Emperor’s internal” and the text on forecasting, calendar, feng shui the art of war, the art of government, Taoist healing techniques.

In 1996, he founded the first “Tea Culture Club” in Hermitage. He is the author of the concept of tea clubs (acquainting with the Chinese tradition of tea). Subsequently Tea clubs are in Russia and cultural centers abroad, uniting lovers and connoisseurs of Chinese culture.

From 2002 to 2007 – President of the Foundation “Institute of Social Technologies.” Claimed direction of the fund – the “restoration of public health in Russia, the creation of effective social technologies using the accumulated knowledge of Chinese management school and traditional Chinese medicine.”

Since 2005, the founder and mastermind behind the gallery “Tea-n-Art Yakimanka”, which successfully engaged in the activities of the exhibition and sale of items of Chinese art. The Gallery has made a great contribution to the knowledge of Russians with the Chinese art of carving jade.

From 2007 to 2008. – Chief Editor of “Kitay.ru.” He Is an advisor to the leaders of several major corporations, as well as advisor to the head of department of the Government of Moscow. In 2008 started the project “Play Book of Changes”, aimed at the direct impact on the way of forming ideas and mindsets in the Russian society.