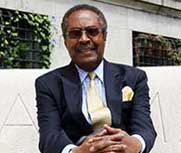 In a distinguished and heralded career, Clarence B. Jones served as political advisor, counsel and draft speechwriter for the Reverend Dr, Martin Luther King, Jr., joined Sanford I. Weill and Arthur Levitt, Jr. in Carter, Berlind & Weill, Inc. as an Allied Member of the New York Stock Exchange (NYSE), becoming the “first African American “ partner in a Wall Street investment banking firm, has been twice recognized as Fortune Magazine’s “Business Man of the Month,” and founded successful financial, corporate and media-related ventures. He has also provided strategic legal and financial consulting services to several governments around the world including The Bahamas, The Dominican Republic, Jamaica, and Zambia.

Dr. Jones has received numerous state and national awards recognizing his significant contributions to American society. Through his work in the civil rights movement, he has dramatically impacted the course of American history. He coordinated the legal defense of Dr. King and the other leaders of the Southern Christian Leadership Conference against the libel suits filed against them and The New York Times by the police commissioner and other city officials of Birmingham, AL. The Supreme Court ruling in this case – Sullivan vs. The New York Times – resulted in the landmark decision on the current law of libel. In April 1963, he drafted the settlement agreement between the City of Birmingham and Martin Luther King, Jr. to bring about the end of demonstrations and the desegregation of department stores and public accommodations. In August 1963, he assisted Dr. King in the drafting of his celebrated “I Have A Dream” speech that he delivered at the March On Washington, August 28th 1963. In September 1971, he again found himself at the center of history-in-the-making when, at the request of Governor Nelson A. Rockefeller; he was requested to help negotiate an end to the historic Attica prison inmate rebellion.

Dr. Jones has been the subject of numerous television and radio interview programs, appearing in such notable media vehicles as CNN, The O’Reilly Factor, The Tavis Smiley Show, NY1’s One-on-One with Budd Mishkin, NPR radio, BBC UK and feature in articles in the Washington Post, Ebony and Jet Magazines and several publications in the UK, France, and Ireland.
A much requested speaker, he has addressed corporate audiences at Citigroup and the U.S. headquarters of British Petroleum, GE, Morgan Stanley Smith Barney and Google headquarters and laws firms such as Sullivan &Cromwell and Andrews Kurth, Texas.

He was the featured speaker at a Stanford University-wide lecture commemorating the 78th birthday Celebration of Dr. King delivered to faculty and students at Stanford during Black History Month (an event which was broadcast live to local radio stations throughout the Bay Area), the Rutgers University School of Law, The Sciences Po, Paris, and The American Institute at Oxford University, The British Library, the Bristol Book Fair, the Aye Write Book Fair in Glasgow. He has spoken at Veterans Administrations Hospitals, The California African-American Association of School Superintendents, the New York Public Library, the NYC 92nd Street “Y”, the New Albany Community Foundation, Columbus, OH.