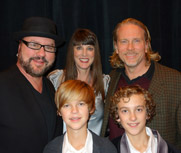 DESMOND CHILD
Grammy winning songwriter-producer, Desmond Child is one of music’s most accomplished hitmakers having written and/or produced over 70 Top 40 singles with 300 million albums sold worldwide over the last four decades. Desmond has reigned as one of music’s most successful creative forces, and his career has been highlighted by a stunning array of diversity. Child’s collaborations include: Bon Jovi – “Livin’ On A Prayer,” Aerosmith – “Dude Looks Like A Lady”, Ricky Martin – “Livin’ La Vida Loca,” Katy Perry – “Waking Up In Vegas,” KISS – “I Was Made For Lovin’ You,” Joan Jett – “I Hate Myself For Loving You,” Garth Brooks & Tricia Yearwood – “Where Your Road Leads,” Kelly Clarkson – “Before Your Love,” Cher – “Just Like Jesse James,” and Alice Cooper – “Poison”. In 2008, Desmond was inducted into The Songwriters Hall Of Fame, and in 2012, he co-founded The Latin Songwriters Hall Of Fame. When not traveling between New York, Los Angeles and Miami developing various musical, film and television projects, Desmond lives in Nashville, TN with his twin sons Roman and Nyro and his husband and partner of 25 years, Curtis Shaw Child. DesmondChild.com

CURTIS SHAW CHILD
Born in Columbia, Missouri, the 2nd of four boys (and the daughter his mother always wanted), Curtis enjoyed a traditional, mostly happy childhood in the Midwest. Early highlights include winning first place in a local Optimist Club Oratorical contest in 1975, and placing 2nd place in the same contest the following year (because, his father said, he had chosen not to wear a tie). In high school, Curtis developed into an accomplished musician and by his senior year transformed himself into a leading man on stage in the musicals PIPPIN and BRIGADOON. Having attended the University of Missouri-Columbia on a full Voice and Clarinet scholarship, Curtis performed in a variety of plays and musicals, and was graduated with a Bachelor’s of Science degree in Music Education in 1984. Shortly after graduation he earned his Equity (AEA) union card in 1985 by performing in SIDE BY SIDE BY SONDHEIM and A CHRISTMAS CAROL with the Missouri Repertory Theatre in Kansas City, Missouri, a year later moving to New York City to pursue his dreams of being an Actor. Curtis’s tenure in New York City lasted a mere 3 1/2 years when he met his now husband, Desmond Child, in the Spring of 1989 while managing the Upper Westside Manhattan eatery. His whole life he’d dreamed of living and working in the big city… but in looking back, his true dream was to live an authentic, truthful life full of spirit, love and laughter. Having celebrated 25 years together, Curtis and Desmond are excited to have brought their family story to life on screen in the documentary film, “TWO: The Story of Roman and Nyro,” which chronicles the extraordinary way they met and connected with Angela Whittaker, the woman who would carry their twin sons Roman and Nyro into the world. “TWO” is a testament to the universal power and ultimate triumph of love – that it is love that makes a family, affirming that modern families may be modern in their making, but timelessly human at their core. Between April 2013 and January of 2014, “TWO” has been screened in 15 film festivals across the USA, in Havana, Cuba; Nassau, Bahamas; and Toronto, Canada. Other than rearing his twin sons Roman and Nyro over the last 12 years, “TWO” has been a satisfying, creative high-point in Curtis’s life, having served as co-writer and co-producer of the film alongside director Heather Winters.

ANGELA WHITTAKER
Angela grew up in the San Francisco Bay Area in a large Mormon family. Although she was grateful for the morals and family values her religion gave her, she would later decide that God lives in everyone’s heart and that love would be her new faith of choice. Her parents instilled in her a deep appreciation for humanity and an acceptance of differences. Her free spirit grew wings and began to fly. Angela received her B.A. in Organizational Communication from California State University, Sacramento. She found herself doing commercial voice-overs for a medical company, got a voice-over agent, and the world of radio and television opened up to her. Angela moved to Nashville to pursue singing, started meditating, and fell more deeply in love with the universe. She studied meditation with Deepak Chopra and became one of his certified instructors. Angela opened a meditation center in Nashville called the House of Bliss with a business partner, and also traveled around the country performing at Deepak’s seminars, selling CDs (music and spoken-word poetry) and living the life of a spiritual gypsy for a few years. She ended up on a meditation retreat in India with Deepak and 500 other people from around the world. Everything turned upside-down during this life-changing trip when she had a vivid dream and decided to carry a baby for her gay friends, Desmond and Curtis. “Being a surrogate mother to Roman and Nyro has been one of the most incredible experiences of my life. I feel so deeply blessed to be a part of such a beautiful family and thank the Universe everyday for bringing us all together and to show the world that it’s all about love.” Angela now lives with her husband, Manuel, in Santa Monica, California, and does voice-over and on-camera work, represented in both Los Angeles and New York. She has written a memoir entitled, Angela’s Diary: The Journey of a Surrogate Mother, in which she chronicles her pregnancy with the twins and is currently seeking publication. Her meditation practice remains the glue that keeps it all together, and she still enjoys teaching in her spare time.