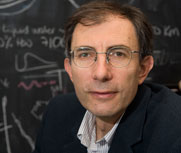 Dimitar Sasselov studies stars and planets at Harvard University, where he is a professor of astronomy. His research explores modes of interaction between light and matter. He and his team discovered several planets orbiting other stars with novel techniques he hopes to use to find planets like Earth. His new book “The Life of Super-Earths” (Basic Books, 2012) describes the renewed search for life on other planets. In 1988 Professor Sasselov acquired his PhD in Physics from Sofia University, followed by his PhD in Astronomy from the University of Toronto in 1990. In 1999 Sasselov became an Alfred P. Sloan Fellow. He has numerous awards and has lectured at DLD, TED, and Davos.

Professor Sasselov is the founding director of the Harvard Origins of Life Initiative, a cross-disciplinary research effort bridging the physical and life sciences. He was a Senior Science Advisor for the Radcliffe Institute for Advanced Study at Harvard and a member of the Global Agenda Council on space security at the World Economic Forum.