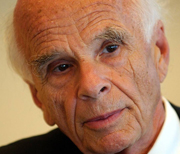 Ervin Laszloi’s Founder and President of The Club of Budapest, Co-Founder of the WorldShift Alliance, and Founder of the General Evolution Research Group. He is also Fellow of the World Academy of Arts and Sciences, Member of the International Academy of Philosophy of Science, Senator of the International Medici Academy, and Editor of the international periodical World Futures: The Journal of General Evolution. He has a PhD from the Sorbonne and is the recipient of honorary PhD’s from the United States, Canada, Finland, and Hungary. Formerly Professor of Philosophy, Systems Science, and Futures Studies in various universities in the US, Europe, and the Far East, he lectures worldwide.

Laszlo received the Peace Prize of Japan, the Goi Award, in 2002, the International Mandir of Peace Prize in Assisi in 2005, the Conacreis Holistic Culture Prize in 2009, and was nominated for the Nobel Peace Prize in 2004 and 2005. He is the author or co-author of fifty-four books translated into as many as twenty-three languages, and serves as editor of another thirty volumes in addition to a four-volume World Encyclopedia of Peace. He lives in a four-hundred year-old former chapel in the hills of Tuscany.