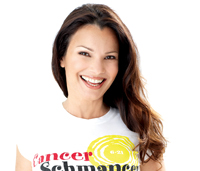 Fran Drescher has a reputation for passion and commitment. She received two Emmy and two Golden Globe nominations for her portrayal as the lovable “Miss Fine” on CBS’s hit series The Nanny, which she both created & executive produced. An accomplished author, Fran received the prestigious NCCS writer’s award for Cancer Schmancer, which along with Enter Whining, were both New York Times best sellers. Fran starred in, created and executive produced the series Happily Divorced, and most recently made her Broadway debut as “Madame” in Rodgers + Hammerstein’s Tony-award winning Cinderella.

A 12-year uterine cancer survivor, Fran turns lemons into lemonade and pain into purpose through her leadership as a cancer advocate. Her mission is to shift America’s focus toward proactive health care and healthy, toxin-free living. She believes that that the best cure for cancer is not getting it in the first place.

As Founder, President & Visionary of the non-profit Cancer Schmancer Movement, she focuses on three prongs to fight the disease: Early Detection, Prevention, and Advocacy.

The organization’s early detection Fran Vans provide free mammograms to women without access to health care. Its Detox Your Home prevention campaign educates people of all ages to reduce risk through healthy living, and Fran uses her unique voice on Capitol Hill to advocate for a range of health issues.

Fran was instrumental in passing the bi-partisan ”Gynecologic Cancer Education and Awareness Act,” earning two commendations in the Congressional Record. She is a U.S. State Department Public Diplomacy Envoy for Women’s Health, traveling globally to meet with heads of state, cancer patients, local NGOs, and others fighting cancer. The Washingtonian named her one of the most effective celebrity lobbyists in D.C.

Fran won the Human Rights Campaign’s Ally for Equality Award for her efforts to defend civil liberties. She received the John Wayne Institute Woman of Achievement Award, the Gilda Award, City of Hope Woman of the Year Award, The Albert Einstein Medical School Lifetime Achievement Award, and the 2014 Citizen Artist Award. The Knesset in Israel honored Fran as the first Jewish actress who played an openly Jewish character embraced by not only Israel, but by many Arab nations.

Fran is the author of a children’s book, Being Wendy, and Fran was awarded the Ally for Equality Award by the Human Rights Campaign for her efforts to defend civil liberties.