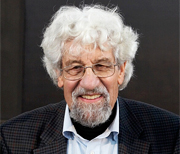 Hans-Peter Duerr is Prof. PhD.,Dr.h.c., Dir.em. Max-Planck-Institut fuer Physik, Munich, Germany. Duerr is a world- renowned nuclear physicist and philosopher with over 100 publications in elementary particle physics, quantum field theory and gravitation.He is also credited with over 250 publications on issues of international cooperation and development, energy, peace and security, ecology, economy, philosophy and epistemology. He was the recipient of the Award of Merit of Oakland in1956, the Right Livelihood Award (the Alternative Nobel Prize) in 1987, the Elise and Walter Haas International Award of California in 1993, the Munich Culture Prize in 1996, and was a Council member of Pugwash 1987-1997, which won the Nobel Peace Prize in 1995.