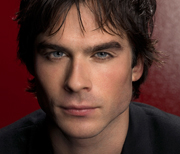 Well known for his role as ‘Boone’ on J.J Abrams’ critically acclaimed drama “Lost,” and currently starring in the CW’s most-watched show “The Vampire Diaries,” Ian is a bustling man on the move. Although his schedule seems limiting, Ian finds and dedicates time to actively involve himself in one of his deepest passions—the current state of our environment. Even as a child, Ian held a reverence for all life. Born in the small southern town of Covington, LA, much of his recreational time growing up consisted of studying and interacting with nature.

While Ian has always been an outspoken voice for the well being of our planet, when the BP Oil Spill devastated the Gulf, Ian unhesitatingly went home to help. Seeing the massive wide scale devastation to the waters, wildlife and people where he grew up was pivotal in igniting his unwavering support towards a better earth. Ian soon realized that he had to be more than an active voice to see the change he wanted in the world, thus inspiring him to launch his own foundation. The IS Foundation focuses on research and development, short-term and long-term goals for the earth, as well as the creatures that call it home, with hopes for immediate change.