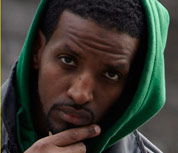 Truly, when it comes to the art of Hip-Hop Poetry, J. Ivy is the 1st of his kind. He is a pioneer, a trendsetter, one who has knocked down impossible doors, taking the Art of Poetry directly to today’s mainstream music & television arenas.  His motivational motto, “Dreams Don’t Come True, They Are True” has guided him from his native home Chicago to becoming a Grammy Award Winning Artist. From his breath taking performances for people of all ages to his appearances on countless television networks, J. Ivy’s passionate delivery always leaves spectators transfixed in a state of inspiration, and because of that he is recognized World Wide.

J first discovered his affinity for the written art during a routine high school assignment. After hearing the talent in J’s writing, as well as in his voice, his English teacher demanded he share his gift on stage. Reluctant, but never afraid, J performed for his peers and to his surprise he received a standing ovation.  Since that life changing moment, J has never stopped creating. He headed to Illinois State University, where he soon became known on campus as “The Poet,” which later led him to performing throughout Chicago.

In no time, J. Ivy became a staple on the Chicago arts scene. Excited about his quick success, but far from satisfied, J pressed on becoming the 1st African-American Poet to represent Chicago on Russell Simmons HBO Def Poetry performing his captivating poem “I Need To Write.” Again he received a standing ovation and was invited back for two encore appearances on the award winning show, which included his heartfelt poem “Dear Father.”

Soon after, Kanye West caught word of mouth about J. Ivy’s impressive skills and offered him a spot on his debut album “The College Dropout”. Holding his ground next to Jay-Z and Kanye on the song “Never Let Me Down,” J effectively showed the world the undeniable power that rest in his words, by recording one of Hip-Hop’s most memorable poetic verses. Still not satisfied J wrote on, performing and collaborating with the likes of the RZA, Erykah Badu, Gwendolyn Brooks, Sonia Sanchez, Bo Didley, Talib Kweli, The Roots, Dave Chappelle, J. Period, Carl Thomas, Mos Def, Common, Jessica Care Moore, Kid Cudi, Jill Scott, Sharon Stone, The Last Poets, and John Stephens, who J. Ivy renamed John Legend (featured in the March 2011 Power Issue of Vogue Magazine). J even penned a rap for Martha Stewart, which she performed opposite of Sean “P. Diddy” Combs on The Martha Stewart Show.

As a versatile artist J. Ivy has also done an abundance of work in the sports world. Whether performing on camera or delivering an amazing voice-over presentation, J’s writing has reached over 100 million viewers thru his work for HBO Boxing, Costas Now, ABC’s Monday Night Football, The BCS Selection Show, The All American Team Show, and The 2005 National College Championship Game – The FedEx Orange Bowl. J has also done work for MTV’s Who’s Got Game, The NBA, Major League Baseball, and CBS Sports’ Inside College Football. Most recently J was heard on the Faith Hill Intro for the entire 2009 & 2011 Season of the #1 Rated Primetime Show NBC’s Sunday Night Football.

Not only has J. Ivy appeared on shows like the Emmy Award Winning Series ER, he has also headed up numerous advertisement campaigns. As a model, he has done national campaigns for Mecca and LRG Clothing. Online he was a spokesperson for the FordUrban.com campaign. Along with 2 Time Grammy Winning Singer Tarrey Torae, he also co-wrote and performed the theme song for Allstate’s Beyond February campaign. He received a Gold Clio Award for his work with Verizon’s History In the Making Campaign, which was featured in over 30 print publications that included a revolutionary voice chip with J’s voice springing from the pages. The same campaign also featured J. Ivy on radio and he was seen in movie theatres nationwide in a commercial spot, which was directed by Bob Giraldi, who also directed Michael Jackson’s “Beat It” music video. He has also headed up a showcase series for McCafe’ & B.M.O.A. across the Midwest.

Currently J. Ivy is taking the World by storm with the release of his debut album “HERE I AM,” which features his single “WAR” now in rotation on MTV Jams & MTVu. He was also featured on one of the latest episodes of Fuse’s Hip-Hop Shop.

Beyond the music and television realm, J. continues to support community arts through his Write To Live Academy & The Dear Father Initiative, which encourages young people to explore careers in the arts.  Besides his regular college touring, J regularly participates in the Chicago Public Schools’ programming, as well as other national events, with his performances, poetry workshops, motivational speaking, and commencement speeches.

J. Ivy’s impressive resume easily distinguishes him as a trailblazer in the 21st Century. Promising to surpass the bar he has set for himself, his accomplishments and those to come are sure to solidify J. Ivy as one of today’s most prolific artists.