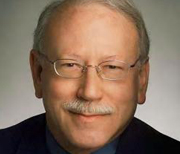 Joel R. Primack, Professor of Physics at the University of California, Santa Cruz, specializes in the formation and evolution of galaxies and the nature of the dark matter that makes up most of the matter in the universe. Primack received his A.B. from Princeton in 1966 and his Ph.D. from Stanford in 1970. He was then a Junior Fellow of the Society of Fellows of Harvard University. After helping to create what is now called the “Standard Model” of particle physics, Primack began working in cosmology in the late 1970s and he became a leader in the new field of particle astrophysics. He is one of the principal originators and developers of the theory of Cold Dark Matter, which has become the basis for the standard modern picture of structure formation in the universe. With support from the National Science Foundation, NASA, and the Department of Energy, he is currently using supercomputers to simulate and visualize the evolution of the universe under various assumptions, and comparing the predictions of these theories to the latest observational data.

Primack was made a Fellow of the American Physical Society (APS) in 1988 “for pioneering contributions to gauge theory and cosmology.” He was elected to the Executive Committee of the APS Division of Astrophysics 2001-2002. He has won awards for his research from the A. P. Sloan Foundation and the Alexander von Humboldt Foundation.

Dr. Primack’s research in cosmology is described in most modern books on the subject, and he has been profiled at some length in several books including New York Times science writer Dennis Overbye’s Lonely Hearts of the Cosmos and Time magazine science editor Michael Lemonick’s The Light at the Edge of the Universe. Primack is also frequently interviewed by reporters for print and broadcast media. He was one of the main advisors for the Smithsonian Air and Space Museum’s 1996 IMAX film Cosmic Voyage. In addition to more than 200 technical articles in professional journals, Primack has written a number of articles aimed at a more popular audience. These include the articles on “gravitation”, “matter”, “dark matter”, “dark energy”, and other physics and astronomy topics in the World Book Encyclopedia, and articles in publications such as Astronomy, Beam Line, California Wild,Sky and Telescope, and in the McGraw-Hill Encyclopedia of Science and the Encyclopedia of Astronomy and Astrophysics.

Primack shared the APS Forum on Physics and Society Award in 1977 with Frank von Hippel of Princeton for their book Advice and Dissent: Scientists in the Political Arena (Basic Books, 1974; New American Library, 1976). In 1995 Primack was made a Fellow of the American Association for the Advancement of Science (AAAS), “for pioneering efforts in the establishment of the AAAS Congressional Science Fellows Program and for dedication to expanding the use of science in policymaking throughout government”.  He has served on the board of the Federation of American Scientists and was a founder of the Union of Concerned Scientists. His most recent science policy work has been on efforts to protect the near-Earth space environment; his popular articles on this have appeared in Bulletin of the Atomic Scientists, Science, Scientific American, and Technology Review. He served as a member of the Executive Committee of the APS Division of Astrophysics 2000-2002. He was a member of the APS Panel on Public Affairs 2002-2004, and is currently chair of the APS Forum on Physics and Society. He has served on numerous advisory panels to DOE, NASA, and NSF. In 2004 he chaired an APS committee on NASA funding for astronomy. He has also served as an advisor to and participant in the Science and the Spiritual Quest project, and as chairman of the advisory committee for the AAAS Program of Dialogue on Science, Ethics, and Religion 2000-2002.