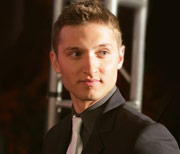 Jordan was born and raised in Los Angeles, CA. He is an entrepreneur, filmmaker, and speaker who is passionate about helping the poor around the world. At just 24 years old, he is the Executive Director of an innovative non-profit organization called Generosity Water, whose mission is to bring clean water solutions to developing countries. In just 3 years, Generosity Water has raised over $2 million, funding over 350 water projects, in 17 countries giving clean water to over 125,000 people. Jordan recently produced a feature length documentary called “La Source” which is currently in the final stages of post-production and set to be released in 2012. This film tells the inspiring story of two Haitian brothers born in a remote village without access to clean water, who against all odds rally the support of thousands of people across the United States and raise enough money to fulfill their life long dream of having a reservoir in their village. Jordan has traveled throughout Africa, South America, and Haiti visiting villages where Generosity Water has built wells. He speaks internationally in universities, churches, and conferences raising awareness about the water crisis and is known for his humorous and inspiring storytelling. He is passionate about seeing this generation of people be proactive in helping humanity.