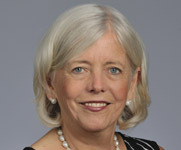 Josephine P. Briggs, M.D., is the director of National Center for Complementary and Alternative Medicine at the National Institutes of Health.

An accomplished researcher and physician, Dr. Briggs received her A.B. in biology from Harvard-Radcliffe College and her M.D. from Harvard Medical School. Previous to her appointment at NCCAM, she was director of the Division of Kidney, Urologic, and Hematologic Diseases at the NIH National Institute of Diabetes and Digestive and Kidney Diseases. In 2006, Dr. Briggs became senior scientific officer at the Howard Hughes Medical Institute. In January 2008, she returned to NIH as the NCCAM Director.