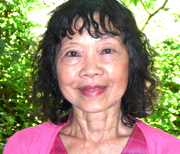 Biochemistry, 1993, 1998 Director of The Institute of Science in Society (ISIS) and author. I obtained my Bachelor of Science degree in Biology in 1964, and my Ph. D. in Biochemistry in 1967 from Hong Kong University, and was Postdoctoral Fellow in Biochemical Genetics, in the University of California in San Diego from 1968 to 1972. During that time, I won a competitive Fellowship of the US National Genetics Foundation, which took me to London University in the United Kingdom, where I became Senior Research Fellow in Queen Elizabeth College.

My career so far spans more than 30 years in research and teaching in biochemistry, evolution, molecular genetics and biophysics. I have over 200 publications, including ten books.

“It has become increasingly evident that GM technology is inherently hazardous and unreliable both in agriculture and in medicine.”