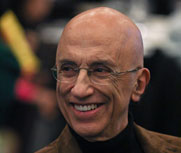 Led the School of Computational Sciences and the College of Science at George Mason University. Follow him on Google, YouTube, Facebook, LinkedIn, Wikipedia, Amazon. Published over 290 articles/book chapters, 16 books including The Conscious Universe, co-authored with R. Nadeau (Springer). Co-author with Deepak Chopra of the forthcoming book, Who Made God and Other Cosmic Riddles (Harmony).

Expert in computational science, astrophysics, Earth systems science, hazards, climate change, general relativity, cosmology, foundations of quantum theory, and consciousness. He is recipient of many grants, is concerned about the future of the Earth, and presents invited talks and seminars at many international conferences, universities and institutions in China, Cyprus, Egypt, Greece, Italy, Japan, Korea, Spain, Turkey, etc.

He is committed to the dialogue between science, philosophy and spirituality and is giving invited talks and workshops on these subjects including: Chopra Foundation’s “Sages and Scientists”; “Science and Non-Duality” (SAND); “Towards a Science of Consciousness”, including the recent conference in Agra, India, and Seoul (with Deepak Chopra, in March 2013); and conferences in science and consciousness, e.g. Kolkata, India; Stockholm, Sweden; Slovakia; Salzburg, Austria, etc. He is an honorary member of the Romanian Academy of Sciences; Member, Board of Trustees, Universities Space Research Association (USRA), 2006-2008; Member, OCTANe Board; IEEE Orange County Chapter – Outstanding Leadership and Professional Service Award, 2011. In 2011, he received the first Spirit of Rustum Roy award from the Chopra Foundation for his work in consciousness and advancing human interests. He works and is committed to bring about human transformation and unity of experience