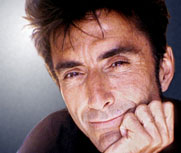 Nick Day is an award-winning filmmaker and screenwriter originally from the UK, currently based near San Francisco. Over the past 25 years, his credits have included a diverse range of movies and programming, both for television and the big screen.

Nick brought the biggest event in the history of humanity – India’s Maha Kumbh Mela — to movie audiences worldwide in the critically acclaimed Shortcut to Nirvana. Over the past decade he has focused his attention on the science of consciousness and how it connects to nondual spirituality and awakening, and is now bringing this theme to the big screen as creator of Mindville, a major animated feature film currently in development. For his in-depth series, The Consciousness Chronicles, Nick interviewed over 50 of the world’s leading scientists, visionaries and thinkers, including Deepak Chopra, Sir Roger Penrose, Stuart Hameroff, Menas Kafatos, Leonard Mladinow, David Chalmers, Lothar Shafer, Huston Smith, Rupert Sheldrake, Rudolph Tanzi, and many more.

Nick speaks publicly on the topic of cinema and consciousness, has guest-lectured at UC Berkeley and USC School of Cinematic Arts, and has appeared on panels on conscious media and the convergence of quantum physics and nondual spirituality.