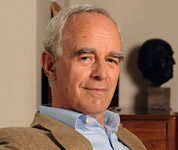 Pim van Lommel, M.D. born in 1943, graduated in 1971 at the University of Utrecht, and finished his specialization in cardiology in 1976. He worked from 1977-2003 as a cardiologist in Hospital Rijnstate, a 800 beds Teaching Hospital in Arnhem, the Netherlands, and is now doing full-time research on the mind-brain relation. He published several articles on cardiology, but since he started his research on near-death experiences (NDE) in survivors of cardiac arrest in 1986 he is the author of over 20 articles, two books and several chapters about NDE. The Dutch prospective study on NDE was published in the renowned medical journal The Lancet in 2001: “Near-death experience in survivors of cardiac arrest: a prospective study in the Netherlands”. This article caused an international sensation as it was the first scientifically rigorous study of this phenomenon. In his later articles he writes about his concept of the continuity of our consciousness, and about the relation between mind and brain. In 2005 he was awarded the ‘Bruce Greyson Research Award’ on behalf of the IANDS (the International Association of Near-Death Studies) in the USA, and in 2006 the President of India awarded him the ‘Life Time Achievement Award’ at the World Congress on Clinical and Preventive Cardiology 2006 in New Delhi. Recently he received the 2010 Book Award van de Scientific and Medical Network (UK).

In November 2007 his book ‘Eindeloos Bewustzijn’ [Endless Consciousness] was published in the Netherlands, which was a national bestseller with more than 100.000 copies sold within one year. It was nominated for ‘The book of the Year 2008’ in The Netherlands. Thereupon it has been published in several languages. In 2009 his book was published in Germany, entitled ‘Endloses Bewusstsein. Neue medizinische Fakten zur Nahtoderfahrung’.In 2010 it was released in the English language by Harper Collins, entitled: ‘Consciousness Beyond Life. The science of the near-death Experience’. In 2011 a Polish edition was released, and in 2012 a French edition was published, entitled: ‘Mort ou Pas? Les dernières découvertes médicales sur les EMI’. Also in 2012 a Spanish translation was published, with the title: Consciencia màs allá de la Vida’. Worldwide more than 200.000 copies have now been sold.