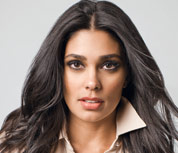 Rachel Roy approaches the design of her eponymous collection with a feminine and modern point of view. Her goal is to create clothing for women who embrace fashion and dress with an effortless elegance and confidence. The results encapsulate a fresh version of glamour that evades the standard protocol for dressing today.

Rachel launched her career at Rocawear and quickly rose to become Creative Director overseeing seven licensees and running all of the design departments and their teams for Rocawear Juniors and Girls.

Rachel launched her own collection, Rachel Roy New York, in Spring 2005. With striking silhouettes, a sophisticated color palette and inventive pairings which transition from day to evening, Rachel’s iconic and versatile pieces – the trench dress, the dinner blouse, the day-to-night dress – have become must-have pieces in women’s closets. In one of the fashion industries highest honors, Rachel was inducted into the Council of Fashion Designers of America (CFDA) in 2007.

A frequent contributor to fashion stories in various publications, Rachel has been featured as a columnist for InStyle magazine, covered Oscar fashion for EXTRA TV on the red carpet, and has appeared on episodes of The Oprah Winfrey Show, America’s Next Top Model, and Project Runway. Rachel volunteers her time with a number of organizations including New Yorkers For Children and OrphanAid for Africa.. In 2009, Rachel was recognized by the Accessories Council with an ACE AWARD for best brand launch for RACHEL Rachel Roy.