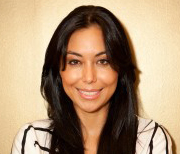 My inspiration comes from the women in the world who live on under a dollar a day, break their backs to make it and still smile back at life. Renata Mutis Black has established herself as a true philanthropist and humanitarian through her commitment to eliminating poverty. Her passion is expressed through her innovation and selfless dedication to the empowerment of women across the globe. She began her work volunteering in twelve different countries in as many months, but it was events of the 2004 tsunami that centralized her vision towards microfinance.

While helping to rebuild the villages in India shattered by the catastrophic flooding, an inspiring woman from the region approached her. “She was strong-voiced, with piercing-eyes and she said to me, ‘I know you have money and I don’t want it, but why don’t you teach me how to make it myself?’” This chance encounter sparked a new course for Black, who immersed herself in study on microfinance and its impact on impoverished communities with 2006 Noble Prize winner, Muhammad Yunus. Black returned to India to work with 800 women in village banking groups, establishing a grassroots microfinance endeavor that exists to this day.

Observing first-hand the limits of traditional charity and having witnessed the transformative force of microfinance through her program in India, Black developed a business model for social impact, establishing The Seven Bar Foundation as the brand for the Empowerment of Women to fund microfinance institutions on a consistent and global basis. By mainstreaming the “ladder” icon, the Foundation has signed cause-marketing campaigns with Fusion Beauty, Royal Asscher, Kraft Foods, and Diageo, yielding nearly half a million in proceeds and impacting 2,350 women locally and globally.

Recognizing an untapped niche market in the luxury lingerie industry, Black trademarked Lingerie New York, Miami, London, Hong Kong and the top 15 markets as brand-raising events for the Foundation to reach a critical mass. To date, she has hosted Lingerie Miami 2009 with Eva Longoria and Deepak Chopra — an event distinguished as Agent Provocateur’s largest show in the US — and Lingerie New York 2010 with Sofia Vergara, amassing over 300 million media impressions.

Renata is currently the vice chair of the CSR Network of YPO, a member of 85 Broads, and a member of Advertising Women of New York.