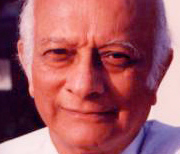 Rustum Roy is among the two or three active leading materials scientists in the U.S. Author of over 1000 papers with major contributions to science (including the most referenced papers in materials science) from sol-gel technology to glass ceramics to diamond films and nanocomposites.

He is the senior-most member in the U.S. National Academy of Engineering specializing in ceramic materials – today one of the hottest fields in science; he is a foreign member of the Swedish, Japanese, and Indian National Academies. As Evan Pugh Professor Emeritus of the solid state and director of the Science, Technology, and Society programs at the Pennsylvania State University, Prof Roy also holds concurrent Professorships as Distinguished Prof of Materials at Arizona State, and Visiting Professor of Medicine at University of Arizona.

Dr. Roy is also intensely involved in reforming religious institutions, locally, nationally, and worldwide. The direction was always towards greater inclusivity. He helped start what is one of the oldest ecumenical house churches in the country, and was for 30 years on the board of the pioneering national ecumenical retreat center, Kirkridge.