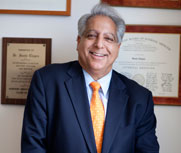 Dr. Chopra has more than 120 publications and five books to his credit.

Dr. Chopra is Editor-in-Chief of the Hepatology Section of UpToDate, the most widely used electronic textbook in the world subscribed to by more than 850,000 physicians in 149 countries.

• The George W. Thorn Award – 1985
• Received the highest accolade from the graduating class of Harvard Medical School, the Excellence in Teaching Award – 1991
• The Robert S. Stone Award – 1995
• American Gastroenterological Association’s Distinguished Educator Award – 2003
• Elected as a Master of the American College of Physicians, a singular honor bestowed to only a select few individuals for being “citizen physicians, educational innovators, scientific thinkers and humanists who inspire those around him or her and sets the standards for quality in medicine.” 2009
• Recipient of Ellis Island Medal of Honor for “Exemplifying outstanding qualities in both one’s personal and professional lives while continuing to preserve the richness of one’s particular heritage.” 2012

Dr. Chopra’s recent book, “Dr. Chopra Says: Medical Facts and Myths Everyone Should Know,” co-authored with Dr. Alan Lotvin, was published in January of 2011. It has received wide acclaim and has been translated into multiple languages.

The paperback version of the above book, “Live Better, Live Longer. The New Studies That Reveal What’s Really Good and Bad for Your Health,” was published in March of 2012.

His book, “Leadership by Example: The Ten Key Principles of all Great Leaders” was published by St. Martins Press in May of 2012. It has received singular advanced praise by many leaders in the United States and abroad.