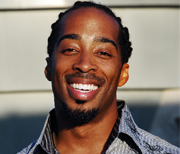 Sekou Andrews is inspiring the business world one poem at a time with The Sekou Effect. As an award-winning and internationally acclaimed spoken word artist, playwright, actor and musician, Sekou has mastered the art and business of creating and performing original, custom-written spoken word pieces that electrify the messages and accelerate the missions of global corporations and non-profits, creative and conservative alike. His galvanizing style of spoken word harnesses the empowerment of motivational speaking, the passion of slam poetry, the levity of stand up comedy, the emotional engagement of theater and the human journey of storytelling to make events into experiences and transform audiences of informed receivers into enrolled responders. Sekou does not inspire you with his story; he inspires you with your story.