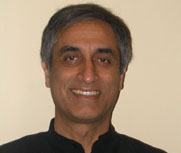 Subhash Kak is Regents Professor of Computer Science at Oklahoma State University in Stillwater. Born in Srinagar, Kashmir, he was educated at the Indian Institute of Technology, Delhi. His current research is in the theories of neural networks and quantum information. He has also worked on archaeoastronomy and written on history of science and on art. He has made the surprising discovery that the ancient Indians knew that the sun and the moon are approximately 108 times their respective diameters from the earth. This knowledge was coded into temple architecture, in the 108 poses of Indian classical dance, and the 108 prayer beads of the japa mala.

His work has been showcased in the popular media including Discovery and History channels, PBS, Dutch Public TV OHM, and in a documentary on music called Raga Unveiled. His writings on the philosophy of mind show how recursion plays a fundamental role in art, music and aesthetics. He is the author of twenty books which include six books of verse. The distinguished Indian scholar Govind Chandra Pande compared his poetry to that of William Wordsworth.

He coined the term quantum neural computing which is a theory of consciousness that is partly classical and partly quantum. In this theory, neural networks do conscious and pre-conscious processing whereas the virtual particles associated with the quantum dynamics of the brain are the ground for the unconscious.