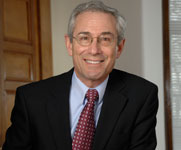 Thomas R. lnsel, M.D., is Director of the National Institute of Mental Health (NIMH), the component of the National Institutes of Health (NIH) committed to research on mental disorders. Dr. Insel has served as Director of this $1.5B agency since 2002. During his tenure, Dr. Insel has focused on the genetics and neurobiology of mental disorders as well as transforming approaches to diagnosis and treatment. Prior to serving as NIMH Director, Dr. Insel was Professor of Psychiatry at Emory University where he was founding director of the Center for Behavioral Neuroscience and director of the Yerkes Regional Primate Center in Atlanta. Dr. Insel’s research has examined the neural basis of complex social behaviors, including maternal care and attachment. A member of the Institute of Medicine, he has received numerous national and international awards and served in several leadership roles at NIH.