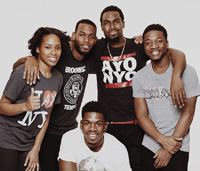 Juquille Johnston, a native of South-Side Jamaica, Queens, grew up in the Baisley Park Housing Project. He is a leader and role model in his neighborhood. He lives by example and demonstrates the value of everyday life. He strives to open peoples minds by helping them identify their own unique gifts and talents. Juquille inspires others to have fun and look good while doing it. He enjoys creating music, playing basketball, fashion, and doing yoga/fitness. He works as a yoga teacher in the New York City Public School system and is a student of Eddie Stern.

Raheem Lewis grew up in the Baisley Housing Project in South-Side Jamaica, Queens, a rough neighborhood riddled with gang and drug violence. His love for basketball and sports kept him from succumbing to a life as a “gangster”, but in his neighborhood there were little economic and educational opportunities. He spent a lot of time “chillin’ on the corner” wasting time. Everything changed when he was introduced to yoga, thanks to his teachers Eddie Stern and Deepak Chopra. Yoga has given him an escape route to focus and make better choices in his life. Raheem now works as a yoga teacher in the New York City Public School system. He still chills on the corner, but now he does it with open eyes to help the other young men in his neighborhood realize there is more to life than drugs and violence.

Jaytaun McMillan is 20 years old and grew up in South-Side Jamaica, Queens, Baisley Project Housing. Even though growing up he was surrounded by lots of violence and drug abuse, his love for sports and basketball kept him out of trouble. As he got older, he was in search for a better life. Being introduced to the yoga practice, helped him elevate his consciousness, learn to take “the good with the bad” and find happiness within. Now, using his leadership skills, he wants to inspire people to be happy and do what they love to do. He is inspired by the quote: “If you are not doing what you love or what your heart desires, you are literally committing spiritual suicide.”