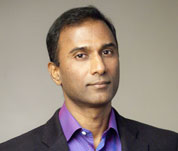 V. A. Shiva is a scientist-technologist, entrepreneur and educator. He holds four degrees from M.I.T, is a Fulbright Scholar, Lemelson-MIT Awards Finalist and Westinghouse Science Talent Honors Award recipient.

Today, as a systems biologist, Shiva’s research focuses on developing the scientific framework, which bridges modern systems theory with ancient systems of medicine. His recent work has resulted in CytoSolve, a breakthrough in silico technology that enables integration of large-scale molecular pathways to discover multi-combination drugs.

He has been featured in Time, Wall Street Journal, New York Times, NBC News, USA Today and other major media and is widely published in peer-reviewed journals. His forthcoming book, THE CONNECTION, is to be published by HarperCollins.

His course Systems Visualization at M.I.T. has become one of the most popular institute-wide interdisciplinary courses. He is a frequent keynote speaker at major scientific and medical conferences worldwide. He has created a foundation in Cambridge, MA to support innovation in inner cities.