How to Meet Your Cosmic Self

Science has been falsely portrayed as the enemy of spirituality, largely because of a noisy band of militant atheists who also happen to be scientists. Their outcry that to believe in God is irrational and therefore anti-scientific misses the point. Not all scientists are irreligious, but the whole premise of this militant group is faulty. They don’t just disbelieve in God; they disbelieve in the entire domain of subjectivity. What happens “in here” is unscientific, they say, a preposterous claim given that the works of Shakespeare and Mozart emerged from the inner world, along with all sensations, feelings, and thoughts.
We don’t need to re-litigate the issue, and we don’t need to enter the area of post-truth, to use a favorite term being bandied about. The truth is that the universe, and our participation in it, is a single activity. It takes all the laws of nature to produce a galaxy or to bring the image of a rose to mind. Nature has only one source and origin, whether we are discussing mind or matter.

This point lies at the heart of my new book, You Are the Universe, with co-author and widely published physicist Menas Kafatos. Our title is a free translation of an ancient India aphorism from the Vedic tradition, Aham Brahmasmi. Our intention was to show that the cosmos is intimately tied to human awareness. In fact, human awareness is pivotal and irreplaceable when trying to unwrap every cosmic mystery. That’s because the only reality we know, or can ever know, is based on experience. Even the most abstruse mathematical model of the universe can’t exist outside experience.

But if this sounds abstract or like a foray into metaphysics, far from it. The whole point of Aham Brahmasmi is to reveal the existence of a cosmic self. The world’s wisdom traditions sometimes refer to God, but not always. What they absolutely agree upon, however, is a hidden level of reality accessible only through higher awareness. Since everyday reality is only accessible through awareness, such a claim isn’t a stretch. “Higher awareness” doesn’t even have to be a mystical term–it can apply to the greatest artists, writers, philosophers, and scientists. 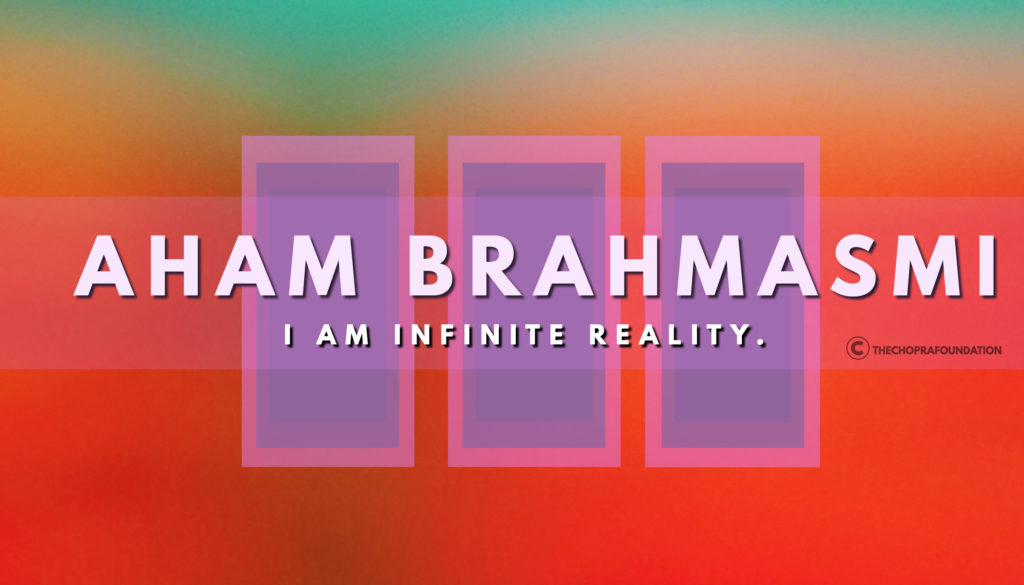 Modern science is best seen as a jumping-off point for inner exploration. Already there is turmoil inside cosmology because the accepted methods of doing science–conducting experiments, making measurements, and gathering data—have reached their limits. At the far edge of spacetime, as well as at the source of matter and energy, physical reality disappears into the vacuum state, which is a void. It is settled science that the entire universe emerged from nothingness, and yet we can’t go home again–there’s no way to return to the pre-created state of the cosmos given that it probably contains nothing like what we term space, time, matter, and energy.

But if that’s the end point of physical exploration, it’s the jumping-off point for inner exploration. Awareness looks out and creates a world; it looks inward and knows itself. A bacteriologist can’t do his job without understanding how a microscope works, yet for a long time science has tried to explain the universe without understanding how consciousness works, and consciousness is the primary tool at hand. The investigations we lump together as spiritual, religious, or metaphysical are actually one thing–a journey to meet the cosmic self. Higher consciousness is nothing more than being aware of awareness, consciousness knowing itself.

You Are the Universe argues that scientific knowledge will take a quantum leap once consciousness is no longer ignored, and a growing cadre of far-seeing physicists, joined by biologists, physicians, and neuroscientists, agree. But the real value of meeting the cosmic self is personal and applies to every person, in or out of science. The path to enlightenment is a project that is as old as recorded history. We are incredibly fortunate to live at a time when the most sophisticated theories in cosmology and the deepest scientific understanding of the universe offer proof that meeting the cosmic self is actually possible–indeed, it’s the only way to settle once and for all who we are, why we are here, and what the nature of reality truly is.