In many fields, such as medicine, psychology, and neuroscience, there’s a serious problem with the difference between subjective and objective reality. Until this problem is solved, the two realities will never really mesh. At first the subject-object split seems easy enough. If you feel a pain in your foot and you find a rock in your shoe, the rock (objective fact) is the cause of the pain (subjective experience). Medicine, psychology, and neuroscience all accept this as the true model for all subjective states (love, happiness, depression, anxiety, etc.)—a physical cause in the objective world creates a subjective feeling.

Such a stance is known as physicalism, and it’s the basis for all science, which means that it is supposed to explain reality itself. But the model is obviously wrong, because it can be reversed. If someone walks up behind you and shouts “Boo!” (objective event), you might be scared for a second (subjective event), but you can also worry about money (subjective event) and create all the signs of the stress response in your body (objective facts). In other words, while objective events can cause subjective experiences, subjective experiences can cause objective events as well–causality may be bidirectional. The fact that schizophrenia has a genetic cause seems well established by now, yet identical twins who are born with the same genes have only a 50% chance of developing the disease. Something else makes the difference in its clinical expression, and it is most likely the difference in their experiences after they were born, which includes how they process and interpret these experiences (subjective).

On examination, it turns out that the subject-object split runs much deeper than medicine. Why is an apple red? A physicalist, using the scientific model, will point to a certain band of wavelengths in the spectrum of light. But photons, the particles of light, are invisible. Red, like all colors, and indeed the visibility of light itself, is a mental phenomenon. A neuroscientist can point to the visual cortex as the region of the brain where sight occurs, but the neurons in that region are 99% like any other brain cell in their structure and operation, depending on the same laws of chemistry and physics that govern molecules outside the brain. Nothing objective accounts for how the brain (an object) creates the sensation of red (subjective event).

The existence of two realities that cannot be bridged means that reality as a whole appears incurably split. Physicalism only pretends to heal the split, yet it’s obvious that science cannot explain where thoughts come from, why we are conscious beings, and why the human mind is creative. Fixed laws of chemistry and physics should, in fact, turn the brain into a machine that rigidly repeats the same processes over and over, without a possibility of new thoughts, feelings, creative breakthroughs, etc. So how can the subject-object split be cured? 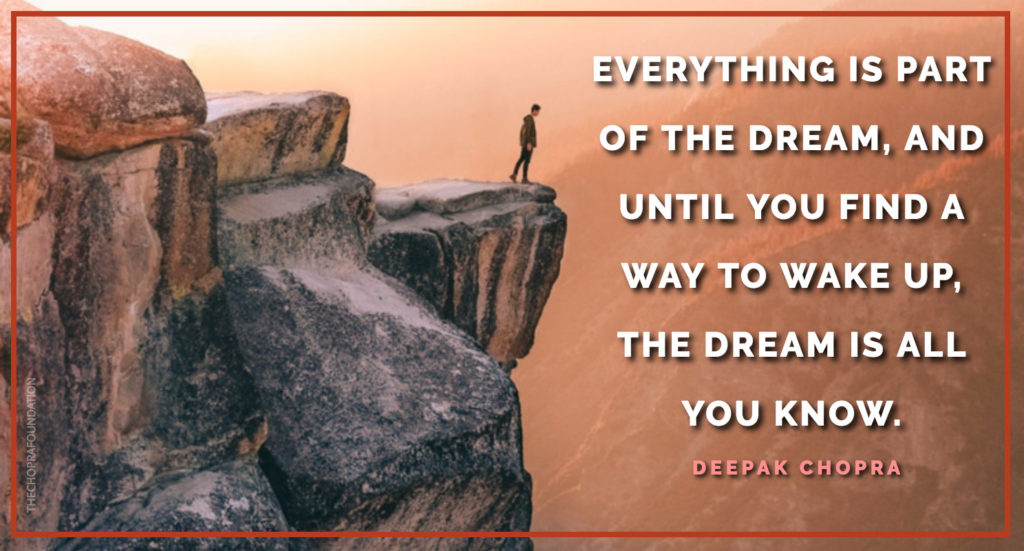 Here are four possibilities, and they seem to be the only ones with a chance to be successful.

You can dovetail subjectivity into objectivity, and vice versa.

Some key scientific concepts can be dovetailed into first-hand experiences that mesh surprisingly well. A model ranging from the macro to the micro level might look something like the following:

Mind begins when consciousness splits into observer and observed, i.e., when the split into two occurs. Similarly, space is defined by the interval between two points. Time also requires two successive points – the first and the second millisecond, or any basic unit of time.

In physics a particle has an invisible state (wave) and a visible one (particle) without any cause that turns one into the other. This seems like intuition, which springs of its own accord, not caused by a previous state of thoughts.

A thought is a concrete mental event the way a particle is. In both cases a “thing” appears in consciousness, even though one is considered mental and the other physical.

One can extend this model with parallels between the atom and concentrated thought, the molecule and a line of thought, etc. The point is not to draw total equivalence between these exact aspects of physical and mental experience, but rather to see that the worlds of matter and mind may not be irreconcilable if we can recognize one in the other.

This approach is best for people who are already reflective. There has to be some familiarity with the terrain of the mind for it to be useful. But a skeptic would argue that drawing parallels is simply drawing an analogy or applying a metaphor. In science, analogies aren’t proof.

Yet, these parallels between subject and object open a window through which some can make connections and develop new hypotheses to explore whether the worlds of physics and mind may converge.

You can subsume objectivity into consciousness.

Here, consciousness comes first, serving as the basis for any perspective the mind takes—imagination, fantasy, science, even hallucination and delusion. In everyday life we do this all the time. A climate change denier (subjective state) can’t be convinced by objective facts. There is no brain-based explanation for this. The mind puts itself first, as the final arbiter of what is real. Objectivity thus has no privileged position. Naturally, scientists howl in outrage at such an assertion, and we all in fact privilege facts as more valid than subjectivity.

Demoting objective facts creates psychological agitation, too, as witness the current flap over fake news. The achievements of science argue heavily in most people’s minds for objective reality being the “real” reality. Still, it is undeniable that consciousness is the basis of all human experience, including our experience of doing science and finding facts. More to the point, this argument retains the subject-object split instead of healing it. You can remove the taint of subjectivity.

If objectivity is the ‘real” reality, the denial of subjectivity amounts to a prejudice that is not based on facts. Art, creativity, depression, pain, love, etc. are not only real but powerful agents in human life and some might say the actual meaning of being human. Physicalists like to point out that facts can be agreed upon in science, while subjectivity varies from one person to another.

But one can point out how an experience like pain, depression, elation, anticipation, and even thinking are just as agreed upon as wave and particle or gravity, with no lesser status as real things. One reason this argument can be effective is that people are already familiar with both aspects of reality even though they cannot give you an explanation for consciousness (the experts can’t either). Now the whole issue of split reality is obvious rather than confusing and exotic. One can see that the superiority of the objective worldview is dubious.

But as before, the subject-object split hasn’t been healed. The big step here is to put subject and object on a more level playing field. That’s a major achievement if it can occur. The bias in favor of facts and a built-in distrust of subjectivity are hard things to get beyond.

You can drop the dualist model altogether and go straight to one reality.

This is the most radical option, and yet it may prove to be the only viable one. It basically says that there is no actual subject-object split, only a perception of such a split that we have grown to be convinced of. Is that really possible? Yes—in fact, the world’s wisdom traditions, with deep roots in India, take this position. In common language, if someone says of the universe “This is God,” a nondual argument is being made, by tracing everything in existence back to a single source. (Physicalists attempt the same thing by tracing everything back to matter and energy, but this requires leaving out or fudging the entire world of subjective experience, not to mention morality, purpose, meaning, inspiration, etc. It’s impossible to believe that such experiences are merely combinations of subatomic particles.)

There are two big problems with the nondual view of reality that have blocked the way forward. First is the whiff of religion. When most people think of a single unifier of creation, their minds jump to God. Since science long ago deposed religion as the explainer of reality, even the slightest hint of the supernatural is fatal. The second problem is a habit of mind: we are all ingrained to see the world “out there” as separate from the world “in here.” This habit keeps the subject-object split going day after day, generation after generation.

But habits can be broken. What is this particular habit that apparently caused reality to split apart in the first place? Wisdom traditions around the world have posed this question, and they are almost unanimous in their conclusion. They argue that life is much like a dream, and in a dream, it would be silly to argue about what is fact and what is subjective fancy. Everything is part of the dream, and until you find a way to wake up, the dream is all you know. This doesn’t eradicate the problems we face in the course of daily life, but it does present them in a radically new context. Thus the rift between subject and object comes down to settling illusion versus reality. This is such a thorny—and fascinating—challenge that we will devote an entire post to it.

(To be cont.) Deepak Chopra MD, FACP, founder of The Chopra Foundation and co-founder of The Chopra Center for Wellbeing, is a world-renowned pioneer in integrative medicine and personal transformation, and is Board Certified in Internal Medicine, Endocrinology and Metabolism.  He is a Fellow of the American College of Physicians and a member of the American Association of Clinical Endocrinologists. Chopra is the author of more than 80 books translated into over 43 languages, including numerous New York Times bestsellers. His latest books are Super Genes co-authored with Rudy Tanzi, Ph.D. and Quantum Healing (Revised and Updated): Exploring the Frontiers of Mind/Body Medicine.  www.deepakchopra.com

Anoop Kumar, MD, MM is board certified in Emergency Medicine and holds a Master’s degree in Management with a focus in Health Leadership from McGill University. He practices in the Washington, DC metro area, where he also leads meditation gatherings for clinicians. He is the author of the book Michelangelo’s Medicine: How redefining the human body will transform health and healthcare. Anoop enjoys exploring and communicating about the intersection of self-awareness, science, and wellbeing. Visit him at anoopkumar.com.